I had a pretty good day today.

First, after coming downstairs, I put a kettle on the stove for coffee.Â  While I waited for the water to boil, I went outside and gathered wood.Â  As I sit here, at 9pm, that fire is still doing quite nicely. 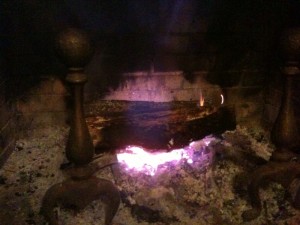 While the fire began and the coffee brewed, I made a large omelet with two kinds of cheese, mushrooms, and onions.Â  Alicia and I shared this.

After that, I think I surfed the web for a few minutes and checked email.

Then I read a short story called “YoungThing,” by Nuruddin Farah, in a recent copy of the New Yorker.Â  It was a sad story with considerable suspense about a young boy in Somalia who had joined a terrorist cell.

Then my daughter called in a panic.Â  She had to be at work and her car had broken down.Â  I dashed off to get her and as I drove down Innes Street my cell phone rang.Â Â  She had solved the problem.Â  She had run out of gas and was now back on the road.Â  It’s impossible for me to judge this behavior — since I myself ran out of gas just two days ago — on Thursday evening, a cold night — and Alicia had to venture out in the night with a gas can. 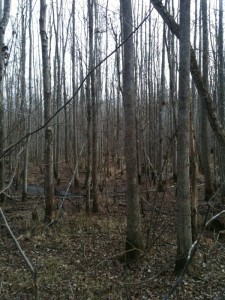 In the early afternoon, I went for a walk with Alicia and Jackie Mudpie (our dog).Â  We walked in 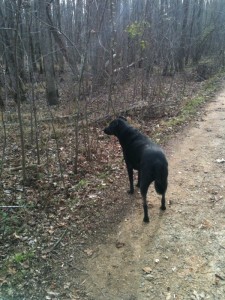 the woods where it was peaceful and scenic.

Upon return, I got a phone call from Tapi — our family’s exchange student in 1973, and a college roommate after that — and one of my oldest, dearest friends.Â  We talked for a while about all kinds of stuff, including life, children, health, parents, yoga…

Then, I visited my Mom.Â  While there, sitting in her room, I read a tender piece by Joyce Carol Oates in that same copy of The New Yorker.Â  In “A Widow’s Story” Ms. Oates recalls the week in February of ’08 in which she lost her husband.Â  Her details are true and vivid and it breaks your heart.Â  Then I fed Mom part of her dinner.Â  Chicken.Â  Potatoes.Â  Gingerbread.Â  She ate, and drank, and never opened her eyes.

After that, I went to the mall and finished my daily 10k steps.Â  Ran into Keith and Carol Earnhardt, some good folks I haven’t seen in awhile, and enjoyed catching up. We talked about Christmas and business and children and pizza and beer.

Came home and had a bowl of soup and an avocado.Â  For dessert, I had a piece of toast with peanut butter and honey.

Currently, I’m sitting on the couch by the fire.Â  The dog is sleeping beside me, pressed against my hip.Â  In the kitchen, I have a cup of tea brewing.

There was some talk in the local news recently about whether a pair of underwear can be a work of art.

What about a day? Â Can that be a work of art?

What if we lived each day as if it were a new work of art,Â and each moment of that day as if it were part of the work?Â  Whether we think of it that way or not (and I certainly have not done that, most of my days), that’s really what it is.