1982 was one of those transition years for me. My oldest daughter, Sarah, was born. I started my career as a teacher. And I got an Apple II Plus computer. This blog is about the computers.

The Apple II Plus did not have a shift key and no lower case letters on the black and white monitor.

It had 48K of RAM. Not megs. Not gigs. K. That’s kilobytes.Â  The word processor — loaded with a floppy disk — took most of that space, leaving 16K to work with. I wrote a novel and saved it with over 40 separate files and many separate floppy disks.

In order to get a letter to print upper case, I had to hit the escape key twice. It would appear on the screen as a white box with a black letter inside.

South Rowan High School had one computer at that time, and it was in the computer programming class.

I was an English teacher, and I hauled my Apple II Plus, monitor and all, to school almost every day. The kids were enchanted.

The next year, the school got five more computers. I was the teacher who was not afraid to turn them on and let the kids write simple programs in BASIC or use a word processor.

Many teachers thought that computers were a fad that would never last.

But some people thought they were important, and many thought I was a genius (because I knew how to turn it on).Â  I was hired to be a Technology Facilitator — something I did for 22 years.

The Apple IIe came out. It had a shift key and lower case letters. That was an amazing machine that I used in several different computer labs for many years.

When it comes to Windows and PCs, I’m an idiot.

But I’ve always enjoyed the world of Apple.

Below are some of the computers I’ve loved. 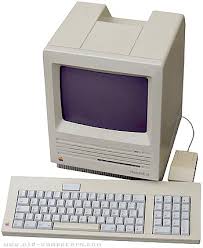