My mother, who suffered from Alzheimer’s Disease, passed away at 2:30 am, just a few hours after this performance. I was with her. Squinting at my phone, I had just read Ed Norvell’s review of the play on the Salisbury Post website, and pecked out a short thank you note to Ed. Moments later, as I sat in the chair beside Mom’s bed, alone, I watched her breathing slow until she finally took her last breath.

We invent our contexts, and my context for this is that Mom — who was a great writer and my biggest fan and best teacher — was waiting for me to get a good review.

That next night, we added chairs, had a full house, and turned a few people away. Many of my dearest friends were there, supporting my play and consoling me. I dedicated the show to Mom. It was the best visitation a person could have.

Poochie is about a family dealing with Alzheimer’s Disease. This production ran in the black box theatre at The Looking Glass Artist Collective in Salisbury, NC, Oct. 19-22. Produced by Spoken Space Theatre.

Thanks to Jon Taylor for doing such a greatÂ  job of shooting this. Run time is 1hr, 23 minutes.

And thanks to Justin Dionne for bringing an insightful, energetic poignancy to his directing — and to his amazing cast and production team for this awesome, production.

Cast
(in order of appearance) 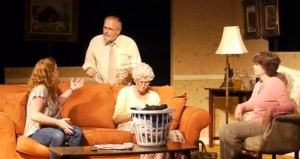