Each summer, when the Salisbury Post publishes “The Garden Game” series, I admire the produce and quietly snicker.

I’m standing in judgment, not actually assessing those who think they’re such hot stuff because they can grow an unbelievably large tomato — but certainly judging those who have so much time on their hands that they would make a trip to town in order to have their pictures taken with said fruit.

So what does it say about a man who would brag about the size of an egg laid by his chicken.

I am here to do that.

My chickens have been laying some whoppers.

And I’m so proud that I took this picture. 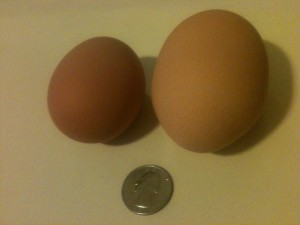