On Facebook, I posted a picture of myself holding this big egg — and Dennis Harris noticed that I was holding the big one closer to the camera, thus creating an optical illusion of bigness. He’s right. I did do that. Dennis estimates the larger egg is 1.5 times bigger than the other egg. I think it’s twice as big, or possibly three times bigger.

In any case, it’s a big egg. Below, you’ll see the picture that’s on Facebook along with another picture. This is also an optical illusion. The larger egg is closer to the camera again — because it’s so damn big!

You might also say that when I look to the east, my nose is closer to the ocean than my eyeballs, since — being a nose — it protrudes. You might say that the hood of my car is closer to where I’m going than the steering wheel.

I still don’t know if this is a triple or double yolk. 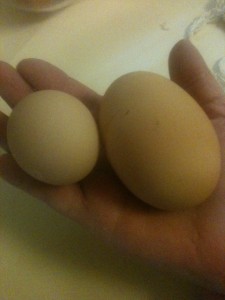 One Reply to “a really big egg”