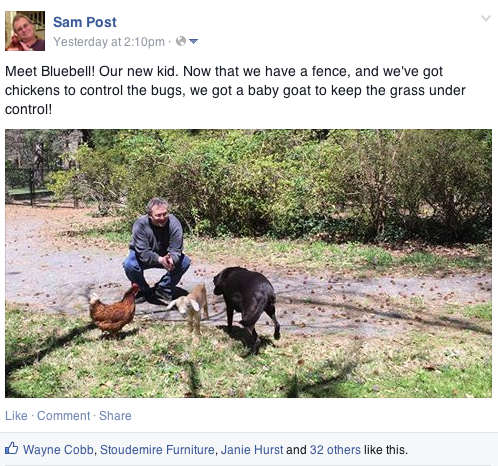 I asked Alicia to take a picture of me in the yard. I called the dog and the chicken over. The chicken did not obey, so Alicia sort of herded it in my direction.

And she took the picture.

I slapped on a a picture of a goat and posted it online and sent a few emails.

I asked if she was fooled at all.

“For a minute,” she texted.

My sister emailed and said “adorable.”

Lisa Davidson emailed saying she “can’t wait to see it.”

Daughter Sarah was delighted. She texted her mother that she had always wanted a goat.

I called someone tonight who happened to have seen that picture. That was yesterday. This was today. And this was about a completely unrelated matter. Immediately upon answering the phone, she asked, “How’s the goat?”

However, many of the people who saw my Facebook post are old or geographically distant friends. Some of them I haven’t seen or spoken with in years. Are they curious to know what’s become of me? I wonder what they must think now, considering I’m the proud owner of a little goat.

Although things in social media have a degree of permanence, they also have a certain ephemeral quality. It’s a vast, noisy space. It would not be plausible to contact them all with the news that this was my way of celebrating the 1st day of April.

Nevertheless, I am experiencing some incompletion around the joke.

It’s one thing to play a joke on a person and then finalize the event by saying “April Fool’s.”

But posting something to social media just puts it out there, leaving some people with the thought that I’m crazy enough to live within the city, with a modest sized yard, and own a goat.

No disrespect intended for those who have goats.

And I have nothing but respect and admiration for goats and the contribution they provide.

But I’m sort of left with the thought that I may have April fooled myself.