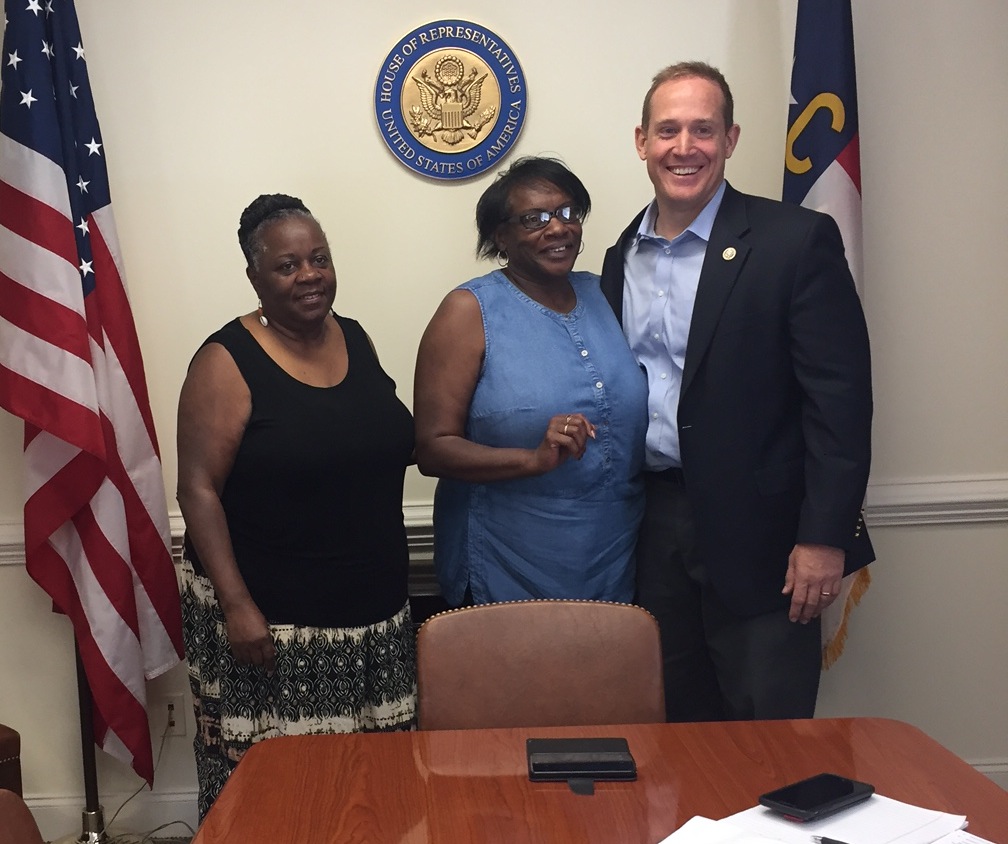 Emily Perry, a good citizen of Salisbury, has been dealing with some health issues â€” and she knows many other people who are also.

When she saw the CBO report that the health care bill passed by the House of Representatives would cause 23 million Americans to lose coverage, and that it would primarily affect the most vulnerable among us, she became furious.

She wrote and called her congressman, demanding that he explain his vote in favor of what she considers a cruel piece of legislation. The congressman scheduled her for an appointment to speak with him.

Emily is an unaffiliated voter, but she happened to mention her appointment to Geoffrey Hoy, who is not unaffiliated. Geoffrey is the chairman of the Rowan County Democratic Party.

Geoffrey asked if he could tag along, and Emily was agreeable.

At a party meeting, Geoffrey asked if anybody else wanted to tag along, and some of us did.

So we had a nice, small, friendly little sit down with Emily, her sister, Charlotte Giles, a few Rowan Democrats, and Congressman Ted Budd this morning. We had a lively discussion about his vote for the health insurance bill.

The Congressman was generous with his time, respectful, and a good listener. He demonstrated that he, himself, can relate to health care issues. He is his motherâ€™s son, and his mother had cancer. Itâ€™s something he is dealing with.

He was reluctant to take responsibility for the bad stuff in the bill, because itâ€™s in the Senate now, and therefore â€œnot complete.â€

Thatâ€™s true. Itâ€™s not. And I appreciate that heâ€™s listening to those who do not like it. (Technically, though — his vote in favor of this bill is complete).

Unfortunately, heâ€™s a free market guy when it comes to health care. One would expect this, since, like most of Congress, heâ€™s pretty much bought and paid for by the Koch brothers, the ultimate free market guys.

In matters of air, water, food, shelter, healing, and health, Iâ€™m believe in peace of mind, not free market. At the risk of sounding like a Miss America contestant, I think we should all work together to provide peace and harmony and love in the world.

His view of health care has less to do with human care and more to do with insurance companies competing for business.

He refers to diseases with expensive treatments, such as cancer, as â€œexceptions.â€

Maybe thatâ€™s a political term, or a health care economics term. It strikes me as absurd. Most human beings will eventually become an â€œexception.â€

At one point, he rightly deduced from my comments that I was suggesting a single payer system. I said I was. Why should anybody be left out?

He explained that this would take away the incentive for people to take good care of their own bodies. He used himself as an example, saying that he might feel it was okay to weigh 300 pounds if he knew his health insurance would not go up.

He was also extremely focused on the fact that 70 out of 100 counties in North Carolina only have one company providing health insurance policies, and that this offered no choice. He repeated that one several times.

I noticed that the overall obsession for Republicans is choice.

Itâ€™s not about choosing between a number of comprehensive health insurance plans. The ACA has different plans. They have silver, bronze, gold, and young adult. Choice.

Itâ€™s about choosing your insurance company. They want lots of companies, with lots of different plans â€” for those who can afford it.

The Republican solution seems to focus on the virtues of having lots of insurance companies completing in a vibrant marketplace.

Geoffrey pointed out to the congressman that he was obviously a decent person who loved his family and wants to do good, and requested that he consider the suffering this bill will cause to elderly people in nursing homes who have sold their houses and spent all their money and rely on Medicaid for their very existence. Geoffrey suggested that the bill he voted for is not a match for the decent person he seems to be.

Alas, it was time for his next appointment and our meeting came to an end. Waiting in the wings was one of his own, Republican office holder Greg Edds, Chairman of the Rowan County Commission.  (Republicans hold all the offices around here and have for decades — so if you’ve got a problem with government, blame them).

After we got up and watched the congressman flash an impressive smile for the camera, we lingered for a moment, and it occurred to me that I should seize this unique opportunity to pontificate a little.

â€œWe need to do both,â€ the Congressman said.

And that pretty much sums it up.

2 Replies to “A meeting with the Congressman”