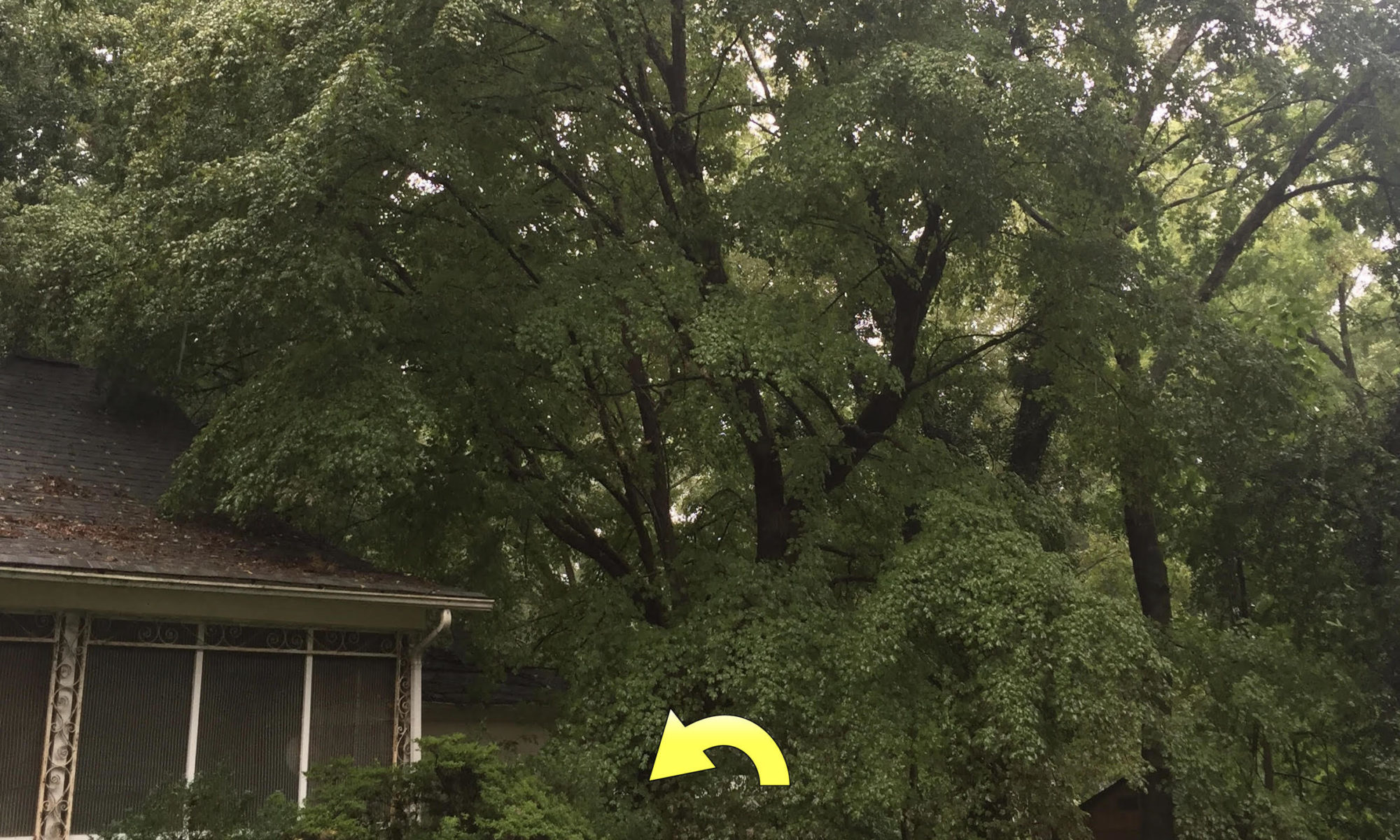 Now that the rain is here and the hunkering has begun, I thought Iâ€™d share a picture of a tree.

I took this picture today. Itâ€™s a maple tree.

In 1989, when Hurricane Hugo hit, this tree was of modest size â€” perhaps the height of our 2nd floor at that time.

The hurricane also took down some large white pines, also in our yard, nearby.  I think we lost 4 big trees. Our neighbor, a couple of houses up the hill, lost 20.

This tree had a limb intact, just below where the trunk had snapped. That limb became the new trunk, and, 29 years later, is the tree you see here. If it werenâ€™t for this tree, we could probably still grow tomatoes and cucumbers. Years ago, before the abundance of shade, we had a pretty nice garden.

Our only damage was a broken car windshield, dented car hood, and downed trees everywhere in the yard.

A few other memories of Hugo:

It was quick and fierce. It hit Salisbury in the middle of the night and did its damage. By noon the next day, the skies were clear and the day was beautiful.

One of my neighbors, an elderly woman, met me in the street in the morning.

My father had had heart surgery the day before at Carolinaâ€™s Medical in Charlotte. My brother and I took off to the hospital.

Salisbury was a mess. Giant, old oak trees were smashed into houses and burying cars. Roads were closed. The forests lining the interstate were filled with busted, fallen trees.

Hurricane Hugo had done something very unusual. It kept its full hurricane status all the way to Charlotte, Salisbury, and beyond.

Getting to the hospital was like driving through a maze. Trees everywhere. Roads closed. No power anywhere and nothing open.

The hospital, however, was another world.  There, lights burned brightly, people smiled and worked and did not panic. The bathrooms served running water, hot and cold. The cafeteria served an abundance of freshly cooked food.

In a hurricane, the hospital is a wonderful place to be. My dad did well in the surgery. My family was there. We spent time together and had access to running water and cooked food.

I spent several days at the hospital and was a little slow turning my focus to the yard. Finally, my neighbor complained.

â€œWhen are you gonna clean this up?â€ he said.

He pointed at the four trees that had grown in my yard and fallen into his.

I went to Lowes and got a chainsaw, sledge, and maul.

In those days, we had a woodstove in our fireplace. We had a very warm house that winter.

It went like this. After a week without power, with a yard full of power lines underneath trees and limbs, Duke Power showed up. These amazing workers cut trees, cut limbs, replaced transformers, lifted the lines, and reconnected everybody in the neighborhood. Then they went on to the next place.

Everybodyâ€™s lights came on. Except in half of our house. Iâ€™ll call it the left side. The left side (the side that included the kitchen) still had no power.

When I called, they said they had restored the power already. I told them the problem. It took another week for them to return for that singular, weird issue. At the time, he explained how that could happen. I didnâ€™t understand then and still donâ€™t.

Hugo was a rare event â€” strong winds and tornados in a large inland area. There was a burst of rain. It was all very quick.

Florence seems to be equally rare. Not much wind. A ton of rain. And itâ€™s so slow arriving. Itâ€™s like weâ€™ve been bracing ourselves for a week, for a turtle. I know Wilmington got it. Will it be here, as predicted? We continue to worry and wait.

Meanwhile, the weather is really nice. I may take the dog for a walk.

One Reply to “Remembering Hugo, Waiting for Florence”