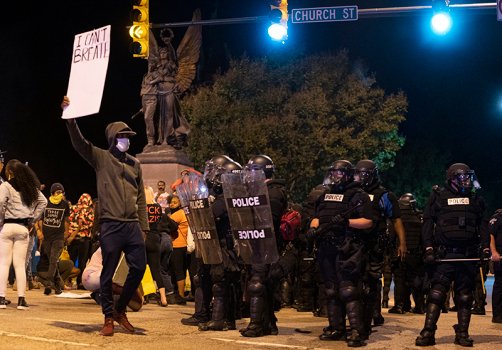 Like all people in Salisbury and Rowan County, the statue is a familiar landmark and a work of art.

But not all people see it as something to be proud of. There’s a lot of shame and hate and discrimination and oppression associated with that statue. It’s symbol of racism, and it’s highly offensive to black people — and many non-black people.

Not moving it, in my view, is not an option. These confederate statues were racist in their inception, and we are seeing them come down all over our country and in Europe. Part of the reason Salisbury is considered historic is because it was slow recovering from the Great Depression. When stuff gets really old, then it’s historic. Let’s not do that again. At this point, we’re behind many of our neighboring towns already, and we’re in a recession. So in addition to the human cost (reminding people constantly of human suffering), the local economy can’t afford for Salisbury to resist the future.

So this is a progressive move that has been bumpy and will remain bumpy — but, as my brother, David (a member of the City Council), said, “it’s the right thing to do.”

The council took public comments on Zoom — for hours. It reminded me of school integration, in the 60’s. I was in junior high school then. That didn’t happen overnight. That was also a hot stew of emotion. Protests happened. Private schools emerged. Part of our society looked for ways to re-segregate — and it did.

Those of us who lived through integration grew and learned and formed many loving relationships out of that experience.

It also reminded me of those city/county school merger forums.

But I gotta say, this seemed more raw than either of those times, even on Zoom.

This may not go smoothly either — but sometimes the government needs to take a stand for justice, for living into the possibilities created in our founding documents — and this is obviously one of times.

Listening to the hours and hours of public comment, I was left with a few observations:

The remarks were well written, and well stated, on both sides. Because I strongly support moving the statue, I with my arrogance assumed that those against moving it were a bunch of dumbasses, and that they would sound like fools, using bad grammar, sounding stupid, using ridiculous arguments. That wasn’t the case. Most of the people opposing the moving of the statue did not sound like flaming racists (although a few did). They basically repeated the same thing: that they always remember seeing the statue and it’s history. But they said it fairly well. Even though I disagree with them, I was surprised at how well they spoke.

It’s personal. The people speaking to keep the statue spoke from personal experience, often sharing how they remembered seeing it as a child. It was as if the statue were a personal possession that somebody was taking away from them.

No empathy. This was the most striking, and disgusting, part of the entire public comment time. Almost all the speakers spoke about why they were right. They gave their position and argued for it. Nobody in the moveit group expressed any empathy for those in the keepitthere group. Nobody said, “I know you’ll miss this familiar landmark and understand it will be a loss of something you love.” Nothing like that was said at all.

Conversely, All those in the keepitthere group sounded woefully unaware of what it represents. They don’t get it. Some are bigots — but most of them sounded like innocent white people, unaware of their privilege and clinging to what’s familiar. They didn’t seem to have a single ounce of understanding for why a confederate statue would be a symbol of slavery and racism, and thereby a pervasive offense to black people. That little detail — the reason for this whole conversation — didn’t seem to register at all.

Personal attacks on Al Heggins, Mayor Pro Tem (and former mayor). Al Heggins has been talking about this for a few years, but those who oppose moving the statue seemed to blame her, personally and completely. They turned her into an evil monster to attack ad infinitum. This was unfair, inaccurate, dehumanizing, and horrible. She’s one person who happened to speak out against something that hurts many people — but there are millions of people who agree with her and support this move, nationwide. Just turn on the TV news. She’s simply the one who is willing to speak up and articulate, for many, a single injustice in one small town. She did nothing wrong. She did something right. But even if she were wrong, she’s a human being and deserves respect. She didn’t get much.

People talked about the statue as if they were talking about a statue. This was a conversation, in a small southern town, about race and racism — and really had very little to do with a statue. Yet, most people talked about a statue. Conversations are more effective when people speak AND listen. There was not a lot of listening here — so in my view, it checked off the appropriate boxes and got the job done, but was not an effective conversation.

People talked about history as if they were talking about history. Again — this was not about history. In fact, those who claimed they cared about history the most seemed to offer a fairly botched interpretation of the Civil War (according to my limited knowledge). This was about the present. Things are changing fast. Some people resist that change. Some people don’t care. Some embrace it. As Obama said, when he won the Iowa caucus in 2008, “This has been a long time coming.” But it’s all about now, not then.

In order to do damage to white privilege, we must acknowledge that it exists. That’s the starting point, and denial does not work. That’s a challenge for all of us white people, and we can’t do it on our own. It’s a journey and an exploration, and we need our black friends to give us some coaching.