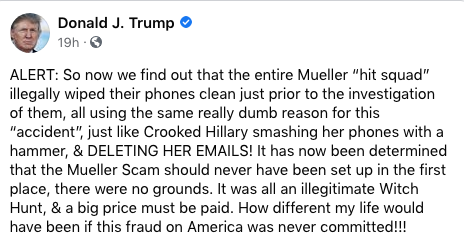 You know â€” if you look at this a certain way… strictly from a literary perspective, heâ€™s not a bad fiction writer. Itâ€™s in keeping with a new kind of American texting/tweeting idiom wherein people disregard basic rules of grammar and punctuation, but actually express themselves in a whole new way, with a creative kind of punctuation and capitalization scheme.

Thereâ€™s this captivating, half-literate, trendy style, and a compelling, evil narrative (sort of a Hannibal Lecter/Joker mixture), that keeps people hooked, waiting for the next micro-episode.

If it were art (which itâ€™s not), some of it would be slander, but not all of it. He would need to leave out the parts where he attacks non-famous people. I may be wrong, but I assume he could still make up stuff about the main characters â€” Obama, Clinton, and Biden â€” and be fine. He could continue to attack John McCain, I would think, and stay on the right side of the law.

Excuse me, I was coughing. Let me continue.

There would be the question about whether artists have a responsibility to uphold moral principles, or should they focus purely on entertainment and let the reader decide. But thatâ€™s another question, and an interesting question â€” but not really applicable here. Because this is not fiction.

However, my point is that if he (just donâ€™t want to say his name)â€¦ if he were not the president and a criminal and a cruel person â€” if he were a just a Twitter fiction writer pumping out a never-ending novel, you could make the case that heâ€™s making up some pretty wild shit.

That said, who knows who writes these tweets. One day, perhaps we will know. It could be him, lying on his bed, reacting to Fox â€” but I doubt it. Iâ€™m not a conspiracy theory guy and I do not know. But if I were to guess, I would guess itâ€™s a highly sophisticated propaganda machine that designs it, plans it, schedules it, writes it, and tweets it. There could be a producer, director, and writing team.