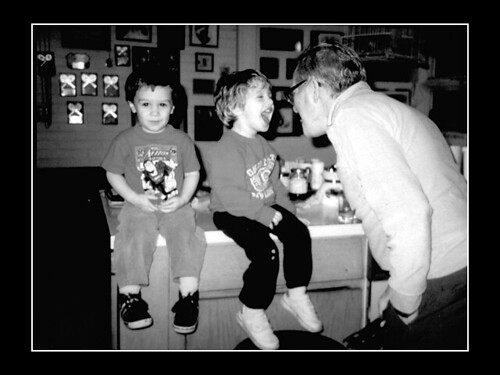 He would pass away the following evening.

He told me that Larry King had Jon Stewart on, and asked if I’d like to come over and watch.

I ‘m two blocks away, at Port City Java, drinking coffee and running my mouth about a movie we were getting ready to make, a sub-professional gorilla film effort, with shooting scheduled to begin in a couple of months — and we were talking about the cast and the script and locations and stuff.

I’m planning to see my father anyway, in a few minutes. During that time in my life, almost all of my late evening hours were spent with him, sitting and watching Larry King, generally followed by a college basketball game.

My mother, a newspaper reporter/columnist, worked late — and I would keep my dad company until she got home. I lived, with my wife and children, only 3 blocks away.

I wrapped the coffee shop and went to my father right then. This was 2006 and Jon Stewart’s Daily Show was at the height of its Bush/Cheney comedy output. For me, at that time, this was an opportunity for big entertainment.

My parents were huge Ted Koppel/Nighline fans — so they didn’t care about watching Jon Stewart. But my Dad knew I would be interested, and I was. He also knew that if he called me, I would come right over. And I did.

Like so many millions of people around the world, watching this show is something my father and I enjoyed doing together. I also watched many Larry King Lives with my wife, children, and mother.

Larry King was such a great interviewer.

I heard him say, in the middle of the night, one night, on his radio show, that he never wrote down any questions and generally only had one ready, as an opener, if he needed it.

He trusted his instincts and was authentically curious.

That’s not to say he didn’t prepare.

On the radio, where I first became a fan, he would interview less celebrities than he did on TV.

He often interviewed writers — and he had always read their latest book that day and often many of their books. It was obvious that he spent his days studying the world of that night’s guest.

I had never read Robert B. Parker until, one night, while I was up late stringing a tennis racket (a side job back in the day and the perfect companion activity to Larry King’s radio show), I heard Larry interview the mystery writer. That was a particularly great show. I still remember Parker’s story of how he got started, what else he did, who influenced him, etc. And I started reading one Spencer novel after another.

I distinctly remember a caller asking him what he would ask Jesus Christ, if he could interview him.

Mr. King, who was born and raised Jewish, with a different name, was not religious as an adult. He said he didn’t know what he would ask, but he’s pretty sure his first question would be “Are you the son of God?”

Twice, I called in the radio show and received the greeting: “Salisbury, North Carolina, Hello.”

I remember being a little stunned that I was on the air and hesitating for a split second, hoping to get the question out coherently.

The callers were the show — he was always clear about that — and he had no patience for hesitation.

“What’s your question!” he barked.

The guest was Scott Meredith, the literary agent, who had written a book I enjoyed and admired. I can’t remember what I asked. I do remember being quite pleased with myself for saying something that got a viable response from Mr. Meredith. Of course he had to say something.

The other time I called, also on the radio show, was in order to ask a question of Bud Collins, the tennis announcer.

I asked him why Borg was never able to win the U.S. Open.

Looking back, I would say that was a pretty stupid question. Borg didn’t win The Open because he didn’t win the most points, sets, and matches. Winning a grand slam tennis tournament is a massive achievement that few have done. The reason Borg didn’t win it is because other people did. There is no why.

Which is basically what Collins said. However, he was a brilliant tennis announcer and gifted wordsmith, so he added a little color, describing how New York fans adored Connors and McEnroe, giving them home court advantage.

When I read the obituary this morning and saw the CNN special tonight, I was struck by how many of those shows I vividly remember. I guess that’s because he interviewed the most memorable people in the world on a daily basis.

When you watch a show with newsworthy people saying things they’ve never said before, you’re watching history in the making. So we all remember it.

CNN played a clip, since he left that network, saying he still had a show but missed being on live TV. He said live TV offered him a thrill that’s not available with his online, podcasty, post-CNN show.

But his most endearing quality will be the way he never included any of his own judgments or assessments in his questions.

In fact, I remember listening to a fascinating show (also radio), wherein he interviewed Mortimer Adler. I had recently spent a weekend getting trained, by Adler and some other professors, on how to lead Socratic seminars for middle school students. At the time, I was a middle school teacher.

Larry King and Mortimer Adler were like two peas in a pod. Both of them were experts in the rare art of asking questions they did not already know the answer to.

Larry King interviewed celebrities and scholars and artists and politicians and scoundrels exactly the same way — letting them talk and respecting his audience enough to let them form their own opinions.

He was big on learning.

The guy who did not get the higher education loved to learn and talk about learning and engage others in it.

Comparing this kind of talk show with what’s available on cable now, well… it sort of shines a light on the kind of media craziness we’re experiencing today.

I’m not saying there aren’t a lot of great journalist out there now. There certainly are many, many fine ones. I’m actually rather hopeful that journalism will eventually sort out the mess that’s occurred while trying to adjust to digital communication.

That is me having opinion. Making a prediction about something that’s impossible to know and something I don’t know much about. Par for today’s course.

The landscape has changed such that today’s cable news and radio talk is not even recognizable when held up against the kind of shows Larry King created.

It would be great to have prime time venues today for that kind of humility and authenticity.

RIP, Larry. I listened some and watched almost every night, for many years, and really enjoyed it.

As you were eager for us to do, we learned.

Your death triggered a memory I have of being with my father.

My father knew I liked Jon Stewart. I knew he liked college basketball. The thing itself — the watching of the TV — is not important. The things that connect people, whether it’s a TV, a turkey sandwich, or a set of tennis, don’t matter.

What matters is the life we get to have when we’re connected.