Instead of tackling running backs, Joeseph Cornellessi has tackled his weight problem by having a football implanted into his stomach.

The 180-pound Cornellessi has reduced his weight from 620, and he’s keeping the unwanted poundage off, thanks to pigskin technology! 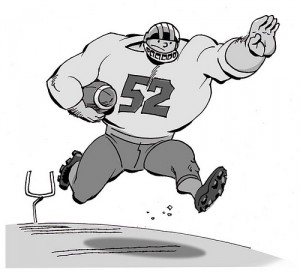 Cornellessi, 42, who was a brawny, iron pumping defensive lineman twenty years ago, says that he’s been gaining weight ever since his playing days ended.

Says Cornellessi: “I tried every diet in the book. Nothing worked. I couldn’t stop eating.”

Dr. Reginald Fursci implanted the football in Cornellessi’s stomach two years ago. The ball makes him feel full and controls his eating.

The football is attached to a tube that exits Cornellessi’s body at his belly button. It allows Cornellessi to inflate or deflate the football. When he wants to feel full so he won’t eat, he adds air. If something special is going on, like a holiday, and he wants to be hungry and eat a good meal, he lets the air out.

“It took me seven months to reach my ideal weight,” says the former defensive terror. “And ever since then, I’ve been adjusting the ball in order to stay at my ideal weight.”

Cornellessi says he keeps a portable air pump with him at all times.

“I developed a big eating habit in college,” says Cornellessi. “The emphasis was on size. The bigger I got, the harder I hit. So I ate all I could and lifted weights and played football every day. Trouble was, when I stopped playing football and lifting weights, I couldn’t stop eating, and the fat began to accumulate. After twenty years, it was out of control.”

Cornellessi says that he doesn’t regret having played football, despite the fact that he has had to spend so many years as a fat person.

“It’s the greatest game there is,” he says. “Football did a lot for me when I was growing up, and, thanks to this new technology, it’s doing a lot for me now.”