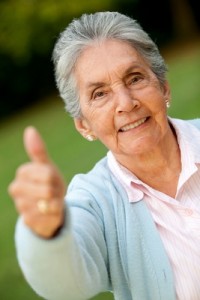 A feisty, victimized grandma refused to let a brutal young mugger get away with his crime, so the crafty lady devised a revengeful caper of her own â€” and it included slicing off the thief’s fingers.

Rita Alvotino, 77, had her purse snatched by a big, muscle-bound, speechless thief as she walked up the front steps of her own house.

But Rita did not flop down and cry about her losses.

She hid behind a bush while her attacker hoofed it to the next block.Â  Then she hopped in her car and tracked the creepy bandit, prowling along behind him until she found out where he lived.

“After I saw him go into his house, I turned the car around, went back home, and relaxed with a nice cup of hot tea â€” planning my next move,” says Rita.Â  “I was more concerned about teaching the jerk a lesson than with getting my purse back.”

And a lesson she did teach.

Rita, an experienced seamstress, took an old, whopping big handbag from her attic and stitched razor blades into the bag’s long straps.Â  Then she richly disguised herself as a much older, wealthy, frail passer-by with a cane.Â  She protected her own arm with a piece of pipe, and slung the handbag over it.

When she strolled the street in front of the mugger’s house, it didn’t take but a few minutes before the cad came whizzing after her again.

This time, when the greedy robber tried to yank the purse from her arm, she pulled it back with all her strength.Â  The purse stayed where it was, and the mugger sliced off four of his own fingers.

“It was a clean, easy slice,” says Rita.Â  “Like a hot knife through soft butter.Â  Those razors were sharp.

“I felt a quick jerk against my arm.Â  Then I saw blood, and his gross fingers rolling across the sidewalk.”

Rita never did get her purse back, because she never called the police.

“I’m sure they would have tried to help me,” she says.Â  “But they would have made a big production out of the whole thing â€” interrogation, identification, proof, trial.Â  It would have been a hassle, and in the end, he would have gotten too light a sentence because the prisons are so overcrowded.

“Now, I know he got what he deserved.Â  Somehow, it makes me feel like we’re all a little more secure.”