I watched the debate. While it was going on, I thought Obama did fine.

Romney suddenly changed from a right winger to a moderate — pitching to the middle. The only surprise there is that he didn’t do it sooner in the campaign. 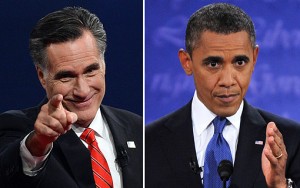 Obama didn’t blast back. But he did point out the flip flops.

From my point of view, Romney was being Romney — a pragmatic candidate who will change his views when he needs to. A tough politician who plays to win.

Obama was being, wellâ€¦Presidential. He was respectful. He explained his positions and didn’t apologize for his record.

With divided government, filibusters, no deal making, etc., critical matters (education, infrastructure, energy) aren’t getting handled anyway. So I found it all the talk a little moot — a little boring.

Then the debate is over and the analysis beings. The talking heads begin to talk. That’s when I found out Romney had kicked Obama’s ass.

Could it be that Obama is being dumb like a fox?

Perhaps he’s looked at the situation and sees that he’s going to win. Incumbent Presidents rarely lose. Romney’s got to sweep the swing states to pull it off.

Maybe Obama is thinking ahead, to the possibility of governing more effectively in the next four years. When the drama settles, history will show that he’s been extraordinarily effective so far.

But what if he gets a little Republican support going forward? What would that be like? He won’t be running again. Maybe he’ll get a year or two of bipartisan workability after this election. Anything is possible.

So maybe he wasn’t tired or sad or preoccupied with no-telling-what was going on the in world during that time. Maybe he was being a statesman who thought it might not be in the country’s best interest to crush the opposition on stage.

The years seem not to be plenty
Since they started beginning with twenty.

And here we are, about to delve
Into the year twenty twelve.

If a dozen years can go that quick
Maybe time and space are just a trick.