I really enjoyed a brief visit, yesterday, to The Ava Gardner Film Festival in Smithfield, NC.

I also enjoyed visiting with Kirk Adam for a few minutes.Â  Kirk is an artist who created this festival and works steadily on it throughout the year (and he was exhausted, as one would expect).Â  The Ava Gardner Film Festival is growing, and maturing, and getting better.Â  Kirk suggested I start a film festival here in Salisbury.Â  Darn good idea.Â  Right now I don’t have the time.

Everything about it was pleasant except for the 80 minutes I spent watching my film, Dodo of the Year (the reason I went there).Â  For some reason, this was agonizing, and I’m not sure why.Â  Here are some of the possible reasons:

1. Quality of the film.Â  As a film, it’s far from being a masterpiece.Â  It’s embarrassing (even though others seem to like it well enough; it won runner-up in the narrative features category).Â  But, I knew this when I made it, five years ago.Â  The goal was to get the experience making a feature length film.
2. Because I wrote it, shot it, and edited it, and have seen each clip thousands of times, the repetition and predictability may be where the torture lies.
3. The script was originally a stage play — obviously a comedy — that got more laughs than the film.Â  I think some people take this story seriously, which makes it not too funny.
4. We had little equipment and virtually no crew, and it shows.
5. We had so much fun making it. (July 4 week, 2005).Â  I spent the following month editing.Â  The cast member are not only great actors but great friends, and it was wonderful spending that time working together.Â  I’m too busy for such projects now, and I miss those days.

Whatever — besides the agony of watching my film, Smithfield was nice.Â  I visited a few workshops, other films, walked the downtown, and toured the Ava Gardner Museum.

It’s a quaint, extremely friendly town, and I can’t believe I didn’t take a single picture!

I did have my picture taken, though.Â  At one point, as I walked down the street, a bunch of kids on a church group scavenger hunt asked me if they could take my picture.Â  I obliged.Â  One of them stood behind me and made “bunny ears” behind my head as they snapped the photo.Â  That got a big laugh. I wonder why.

I had been to Smithfield before, two years ago when they screened Coffee Therapy — but this time I spent a little more time learning about Ava.Â  Wow, she was something else.

Such a beauty.Â  Married to Mickey Rooney, Artie Shaw, and Frank Sinatra.Â  Rejected many marriage proposals from Howard Hughes, who wanted her bad.

When she married Mickey Rooney, in 1942, they were both under contract with MGM and, according to their contract, had to get permission from Louis B. Mayer.Â  She was a head taller than Mickey.

Although her marriage with Frankie was brief and filled with jealousy, on both parts, her studio connections helped him get the role in From Here to Eternity, which turned his career around (he won the Oscar).Â  They remained close until death did them part.

I enjoyed reading the letter Governor Jim Hunt wrote her, in 1978.Â  They both graduated from Rock Ridge High School, a rather small building for a high school.Â  Hunt’s elegant letter invited her to a reunion that marked the closing of the school.Â  This was her last public appearance in North Carolina.

According to the extremely knowledgeable and helpful docent at the Ava Gardner museum (a woman who, incidentally, was kind enough to say — and I think she meant it — that she liked my film) the Ava Gardner Museum has a shelf life.Â  Her biggest fans are people my age and above, so eventually the demand for the museum could diminish (see Jessica’s comment below).

Alas, I also had to miss the 6pm screening of Kiwi Child, my other film in the festival.

Because my daughter missed her flight on Thursday, I wanted to get home and then to the Charlotte airport to pick her up. 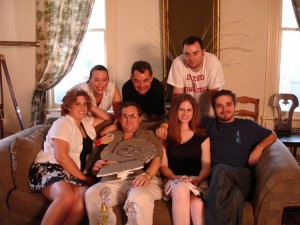 I made these films and I’m the first to admit they are not masterpieces.Â  But, looking back, I do find them amusing.Â  They both contain anti-W sentiments — something I’m proud (and something that was not so popular in these parts at that time).Â Â  Both films involved working with some of my favorite people and were therefore great gobs of fun to make.

Kirk Adam created this film festival and he runs it.Â  He is not only a generous guy (he’s including my films) — he’s also quite a fine artist.

Also, last year, they premiered Coffee Culture USA, a documentary that includs a segments about coffee shops around the country.Â  One of those segments was about our filming of Coffee Therapy, at Escape the Daily Grind in Salisbury, NC.