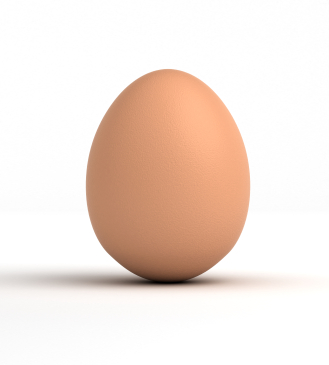 We have chickens, and although they are nearing the end of their laying careers, we still get more eggs than Alicia and I can eat (In recent weeks I’ve been having smoothies instead of eggs for breakfast).

So we have an ample supply of eggs and today I embarked on boiling a dozen.

When hard boiling fresh eggs, the challenge comes in the peeling. Older, grocery store eggs peel easier. Fresh eggs sometimes have a firm grip on the shell, and, when peeling, much chipping and deformity can ensue.

I’ve found ways to mitigate this problem. One way is to use a certain pot. I don’t know why, but this one particular pot in our cabinet delivers eggs that are easier to peel. Another way is to take them fresh from the boiling water into a bowl of ice water, and then peeling. The temperature change seems to shock them out of their shell.

But it’s still a challenge and some eggs don’t retain their smoothness and are sometimes so pockmarked that they become a treat for the dog.

And now I’ve found the most perfect way ever! Here it is:

1. Put one dozen eggs in a pot. Fill with water. Ignite stovetop and adjust to its highest flame.
2. Get a phone call. While on the phone, move to my office (a separate entrance from the house).
3. Talk for awhile. Get off the phone. Take notes from the call. Send the caller an email.
4. Make another phone call.
5. Check email.
6. Go the bathroom. Because the iPad is upstairs, go up there to use the bathroom. Sit on the toilet and rewatch a few minutes of 30 Rock.
7. Go downstairs. Watch a few more minutes of 30 Rock.
8. Hear loud pop come from the kitchen and imagine that something must have fallen or the house is settling and continue to watch this hilarious episode of 30 Rock.
9. Hear another pop.
10. Continue watching 30 Rock.
11. Hear another loud pop.
12. Get my ass up and go in the kitchen to see what’s causing all these pops.
13. Notice the burner on the stove flaming away underneath a pot of dry eggs.
13. Remove the pot from the stove and fill with cold water.
14. Peel the eggs, cooked to perfection, with ease.

Yesterday, I dropped by Consign 120, a store in Concord, and bought four dozen eggs. Randy, the owner, also has a farm, and he brings in fresh eggs each day. I often stop and get a dozen, or two, or three.

The reason I got four dozen is because I promised to bring 30 hard boiled eggs to the family Passover Seder on Friday night. I got extra because these eggs are small.

Fresh eggs are harder to shell when hard boiled that the ones in the store that could be several weeks old. But they taste a lot better — so I’ll work it out (rolling the eggs first and shelling while hot; a little salt in the water, mutilating a few…).

A few months ago, Randy didn’t have many eggs. He had a fire in the barn and the chickens were traumatized. They weren’t laying. Now, in mid-April, the girls are happy. He has dozens of eggs on hand.

An egg, on Passover, has many symbolic meanings. In our family, we most often refer to it as a sign of life. It’s also the only food that gets harder as it cooks longer — and that has some meaning (can’t remember what).

For Easter, the egg symbolizes the seed of life and resurrection of Jesus Christ.

And for both religions, of course, the egg is a symbol of spring and new birth.

But I have a different theory.

I think both holidays (and religions) started using eggs because it’s peak laying time for chickens and there were so many of them.

Somewhere along the way, a Jewish mother, and, a couple of thousand years later, her Christian counterpart, said “We’ve got to find something to do with all these eggs!”

“I’ve got an idea,” her husband said. “When everybody’s over here for Passover, put a hard boiled egg on every plate.”

And the Christian mother, who was fond of Easter and had an eye for design, said to her husband, “Look. I just decorated these eggs! Take them eggs outside and hide them in the grass. I’ll call the neighbors and all the kids can have an Easter Egg Hunt.”

Tapi, who was an exchange student at our house when I was in high school, a roommate in college, and still a dear friend, grew up in Finland.

I remember him telling me that his mother gave him hard boiled eggs in the morning, in winter. He put them in his pocket and used them to keep his hands warm on his way to school. Then he ate them for lunch.

When I was in college, I had the opportunity to spend a semester in Italy, in Venice. Venice is close to the Dolomites â€“ very good skiing â€“ and I took advantage of that several times.

I remember a meal from that time (1976). I was in the mountains and went to a small restaurant for dinner. I ordered the cheapest thing on the menu. My Italian was weak and, in those days, not many Italians spoke English. I had no idea what I had ordered.

The waiter brought me a bowl of broth and an egg. He cracked the raw egg and dropped it into the soup.

Growing up, breakfast before school was a little different than it is these days. My mother took orders, each morning.

She had five children, a husband, and a busy, full-time job. Yet, each morning, she asked us how we wanted our eggs. Fried? Scrambled? Omlet?

Sometimes I placed my order while I was still in bed, or getting ready for school. Sometimes I was already at the table.

Either way, my mom took special orders from everybody, every morning.

How things have changed. My kids never had eggs for breakfast. There wasnâ€™t time.

These days, I do get eggs many mornings â€“ and my wife fixes them (or me). But itâ€™s a matter of how many, not how I want them cooked. Her dishes are always fantastic, but if I don’t want them the way she’s cooking them, then I can cook them myself.

Come to think of it, I havenâ€™t had breakfast yet.