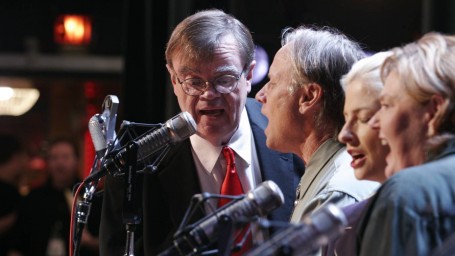 In a few minutes, Alicia and I will be making the pilgrimage to see A Prarie Home Companion, in Brevard, NC.

That show begin a month after I graduated from high school, and I’ve been a fan since then.

My dad liked it, and I have a vivid memory of sitting in the car on trips and listening and laughing. After all, I was an English major, and Mr. Keillor has always had a knack for English major jokes.

I’m not much of a concert goer. I could count on both hands the number of I’ve been to in my life. I’ve been to more political rallies — and a whole lot more training and development weekends 🙂

But this is special. He’s retiring, and I’ve always wanted to go.

So this is just to say I’m pretty excited!

Daughter Sarah is coming home for a two week visit.Â  We pick her up at the Charlotte airport tomorrow night (tonight, technically, since it’s after midnight now).

According to my phone, here’s the weather forecast where she lives, in Fairbanks Alaska:

Here’s the forecast here in Salisbury:

She’ll probably be walking around barefoot, complaining about the heat and humidity.

It sure will be nice to see her and be with her.

My son has lived in the Asheville area for the past six years, and we occasionally visit.Â  We never spend the night, so we usually don’t have time to see many sights — usually downtown Brevard or Asheville — and the inside of a restaurant or coffee shop.

Sometimes a waterfall or two.

I’ve always wanted to stop for a visit to Connemara, Carl Sandburg’s home in Flatrock, NC.Â  Each time we go, to and fro, the sign that marks the path to Sandburg’s home beckons from the highway.

This time, the trip had two primary goals.Â  A look at the UNC-Asheville campus (for my daughter’s consideration), and a trip to Sandburg’s home (only a couple of miles from the camp at which my son works).Â  We also enjoyed a sandwich and pleasant evening walk through lovely downtown Hendersonville.

I like the Asheville area.Â  Who doesn’t?Â  But despite the fact that it’s two and a half hours from home, I had never been there in my life until I first took my son there to college.

Sandburg’s home is a National Park.Â  According to some of the literature one sees while walking the grounds, it’s the only National Park ever created for the home of a poet.Â  That makes sense.Â  It’s a special place.Â  I’d like to go back — with more time and with my dog.Â  The grounds are huge with miles of trails.Â  Sandburg paid a whopping $45k for the property.

We also got there fifteen minutes too late for the last tour of the day.Â  We still saw the house and peeked in the windows.

My wife and I did a similar thing in 1979.Â  We visited Wordsworth’s house when it was closed and and almost peeked in those windows (until we saw that there was a little old little old English lady inside –aÂ  Wordsworth descendant?Â  I like to think so.)

Sandburg is not considered a North Carolina poet.

I remember this subject coming up in the ’70’s.Â  I spent college summers working in the NC mountains, near Blowing Rock (also in NC, but a bit of a distance from Flatrock).Â  Once, a tourist with a pencil and pad stopped me on the street and asked me if I knew the location of Carl Sandburg’s home.Â  I was an English major, so I told him with some authority that Carl Sandburg never lived in North Carolina.

Sandburg moved to Flatrock in 1945, from Michigan, because his wife wanted a better climate for her beloved goats. He lived there until his death in 1967. The literature posted around the house says that he wrote a third of his published works while there.

The bottom pictures posted here — with the horses — have nothing to do with Carl Sandburg. These were taken at Camp Mondamin, where my son works. My daughter had “never touched a horse before,” so my son helped her out. Oddly enough, he’s had a good bit of experience with horses, having had a part-time job in college working on a horse farm.