Snow, as it falls, is so beautiful. Â  I always think of this:

“Yes, the newspapers were right: snow was general all over Ireland. It was falling on every part of the dark central plain, on the treeless hills, falling softly upon the Bog of Allen and, farther westward, softly falling into the dark mutinous Shannon waves. It was falling, too, upon every part of the lonely churchyard on the hill where Michael Furey lay buried. It lay thickly drifted on the crooked crosses and headstones, on the spears of the little gate, on the barren thorns. His soul swooned slowly as he heard the snow falling faintly through the universe and faintly falling, like the descent of their last end, upon all the living and the dead.”

the final, most beautiful passage from “The Dead.”Â  James Joyce

But when the loveliness gives ways to freezing rain and slick footing, I’m thinking different things.

Monday’s snow has almost completely melted, but you could still ice skate in our front yard now (Sunday afternoon).Â  We have a lot of trees.

In fact, my fireplace hasn’t seen a lot of action in the past couple of days.Â  My little trek to the woodpile is rather dicey.Â  Rather slick.

In the past two years, I’ve had two good falls on ice.

One was last winter, when I fell down six concrete stairs while taking out the garbage.Â  There was a lot of snow on the ground then, and I didn’t get hurt.

The second was this Monday, as the snow began to fall.Â  I took a walk, enjoying the beauty, and fell flat on my back.

I associate falling on ice with skiing, sledding, and getting a day off school — fun things I enjoyed when I was younger and smaller.

After blogging about this earlier in the week — trying to be funny — two of my Facebook friends reminded me that falling as an adult is not always that funny.

Glenda Dyson said she broke her tail bone a few years ago.

It takes me two days to deliver Coffee News throughout Rowan County.Â  I began Thursday afternoon.Â  Walked on plenty of ice and kept my balance the whole time.

As I was leaving the house on Friday morning — a day that would involve much stepping on ice — my wife had just returned from walking the dog.Â  They had been gone awhile.

As the day progressed, I mentioned falling to a few other people, and almost all of them had, indeed, fallen.

Perhaps I possess a special intuition about who falls down.Â  Or perhaps a lot of people fell on all this ice.

Walking into a retail store, I met one of the employees at the door.Â  We exchanged pleasantries.Â  When he asked how I was doing, I said, “Fine.Â  Only fell once.”

When I delivered to the Ro-Med waiting room, I ran into one of my son’s friends from school (now all grown up).

Then she pointed to her mother, sitting next to her and sporting a big red bump on her forehead.

A waiter warned me to be careful.Â  “It’s slick out there,” he said.

So here I sit, beside the fireplace, with no fire.Â  Last night I slipped and slid my way to the woodpile.Â  I guess I’ll try it again now.Â  It’s a risk, but the warmth of the fire is worth the drama of walking on ice.

so much fun
frozen snow 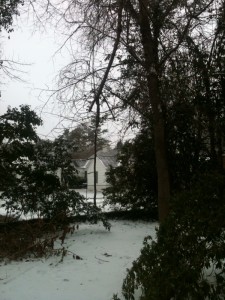 I bought a kerosene heater the other year and used it on rare occasions when I was living by myself and too tight to pay high gas bills.

I eventually ran out of clear kerosene and bought some of the red stuff at a gas station. I don’t think my heater liked it. It smoked when I tried the colored kerosene. Made a mess and as a result I hadn’t used the heater in a couple of years.

But with a winter storm and the threat of ice fast approaching, I drug the heater out of the garage Friday afternoon, set it on the deckÂ  and fooled with it until it fired to life. Sure enough, the heater was still smoking.

I syphoned most of the red kerosene and let the rest burn itself out. Meg and I drove about a mile to the Country Cupboard to see what type kerosene they sold.

It was red, but a guy who was buying a couple of gallons told me that the Hess station on East Innes Street across from Wendy’s in Salisbury sold clear kerosene. So Meg and I drove over there.

The parking lot was packed. At first we couldn’t figure out what the excitement was. Then we realized: It was a clear kerosene shopping frenzy.

People were waiting in line to buy the stuff. One guy said the Hess station was the only place in town that sold the clear fuel.

Meg stood outside and talked to the other customers while I went inside to pre-pay (it was required) for my kerosene. There was a line of customers. I had to wait at least five minutes. The guy behind me said he was taking care of some of homeless people and needed kerosene to keep them warm Friday night.

I’ve long admired Meg because she has that rare ability to talk to people of virtually any socio-economic background. I realized as much again when I stepped from the Hess store and returned to the kerosene pump.

Meg was laughing and carrying on with a number of people who (how to put this politely?) probably don’t reside in Salisbury’s country club section.

One guy told her it was his birthday and pulled out a driver’s license as proof. He was glad it was snowing on his birthday, he said.

Meg wished him a happy birthday, then, noting he was born in 1962, said, “You’re just a young fellow.”

Then he eyed Meg and asked where her husband was.

“I think he thought I was flirting with him,” she said.

The adventure was fun, and we’re all set to stay warm should the power go out as a result of the storm.