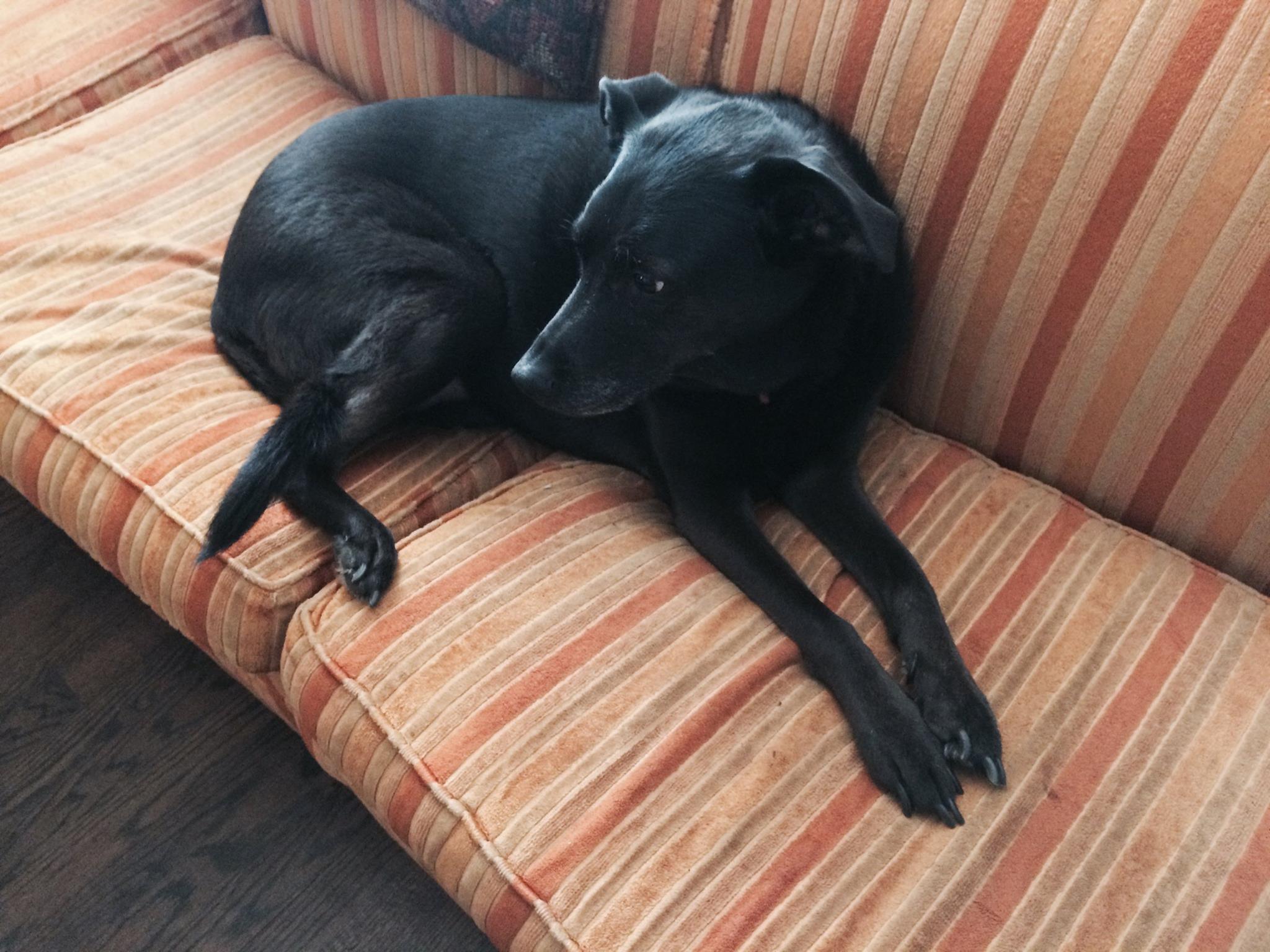 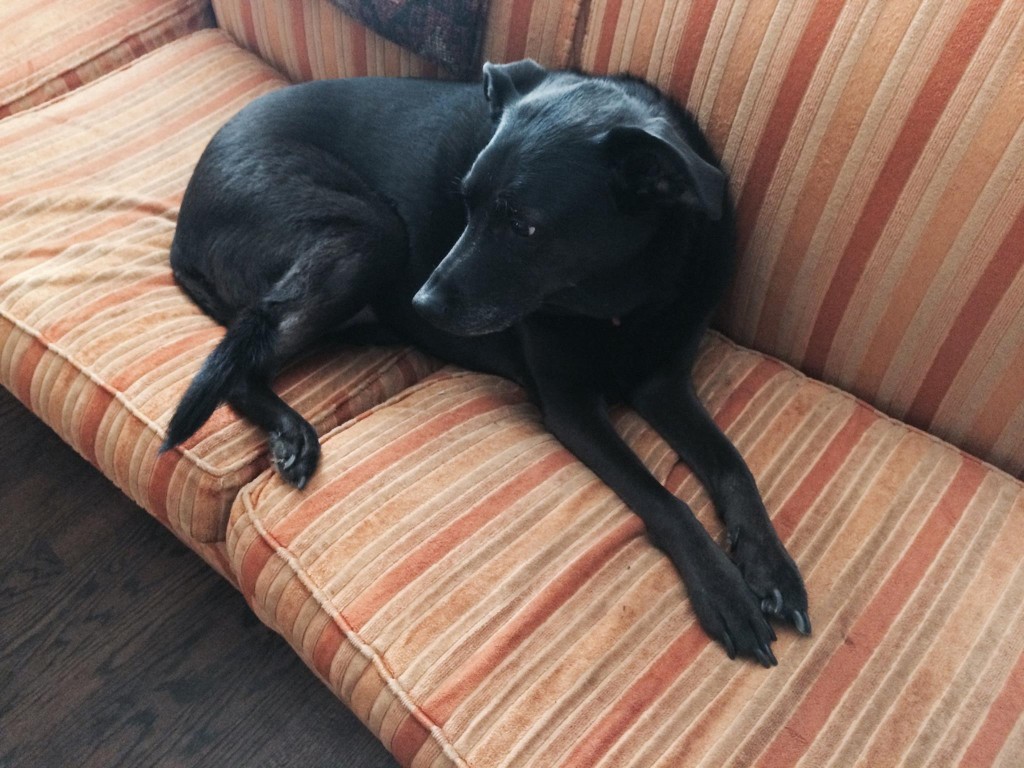 We rarely called her by her full name, Jackie Mudpie. She mostly went by Jackie, and sometimes Jack-Jack or Sweet Doggie, or various sounds like Doggie-woogie-beegie-baggie-boo.

Most people have a special voice they use for their dogs, and so did I. It’s a high tone that’s a little squeaky, a little weird, and full of affection — and it comes from a different place that’s reserved for objects of pure delight.

She had a long life for a dog and was a baby until the end.

She was a fast learner and messed the house only twice — on the first day we brought her home, and twelve years later, on her last day of life.

The day we found her is a vivid memory for all of us.

A few weeks prior, we had lost a dog in a tragic accident. The guy who mowed my parents yard had not shut the fence gate on departure, and the love of my daughter’s life, Honey, had raced onto Innes Street and been hit by a car. 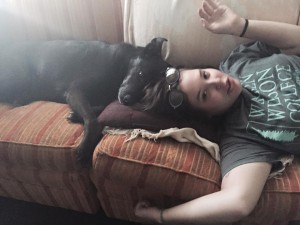 In the days that followed, I took Emma to look at puppies and none were suitable. I begged her to settle on a puppy to ease the pain. There was no replacing Honey.

Emma was still in love with Honey and still too struck with grief to consider another dog, but my mom, like me, had other ideas. My mom was a person who knew what was best for her grandchildren, whether they agreed or not. And she was persistent — not one to lose an argument, even with a grieving eleven year old.

She persuaded Emma to keep looking, whether she wanted to or not, and insisted, one Saturday morning, that we take a ride to Albemarle. She had the address of a woman with a yard full of dogs that needed to be rescued.

As it turns out, the dogs did need rescuing, but the woman who lived in the house needed rescuing more. She was a stressed out mess with 50 dogs on her hands. People dropped them in her yard. She fed them bread from the day-old bread store. She begged us tell people about her, to send help, to get Mom to write an article about her and her plight.

Mom had not gone with us. Neither had Alicia. That task was assigned to my father, a man of action. Dad was the primary finder of things that matter: puppies, cars, shoes, houses, safe spaces. He drove, leading us on this adventure to Albemarle. I sat in the front. Emma sat in the back with Sarah, her older sister, her pillar and protector of all things emotional. 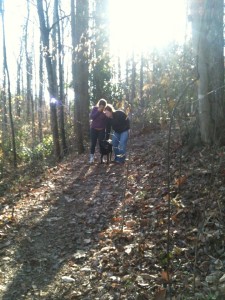 The place was depressing, with too many unhappy dogs, all begging for their freedom inside a maze of fencing. Emma proved that she was right. There was not a single dog on the property that could replace Honey. We turned to go home.

As we walked down the hill, toward the car, there was a puppy on the loose that seemed to appear from nowhere and somehow sprang into Sarah’s arms. Emma immediately joined the 3-way embrace.

Having survived a diet of bread, Jackie was sweet, frail, and grateful. She was anemic and walked with a limp. We thought she was a lab and hoped she would live.

I remember Dr. Almond’s smile as she advised us on bathing and brushing and other matters of care. She told us Jackie was a feist and gave us vitamins.

Alicia is quite skilled at nurturing young beings, and our new family member soon thrived.

Jackie never gave us any problems. Emma taught her to sit, shake, turn around, lie, come, and speak. 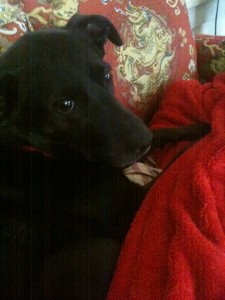 She would get on the couch and be petted by three or four people at once. In our house, Jackie was like the Beatles. She was the object of our over-the-top group affection.

We took a thousand pictures of her, trying, unsuccessfully, to capture her true essence. She was so black that she barely showed up in photographs.

We often walked her three blocks to my parents house to visit their dogs. My parents also had a cat. The first time Jackie tried to play with the cat, she got scratched on the nose. After that, when she saw the cat, she took cover behind a human being and cried.

Aaron was off at college. My father passed away. Sarah moved to Alaska. Emma went to college. Mom’s health declined and her life came to an end.

And then it was us, the empty nesters — Alicia, me, and the one who never left, Jackie.

She slept on our bed. Some nights, when we were up late, working, she would go upstairs around midnight and keep the bed warm and wait for us.

She took turns being with Alicia, while she worked in her office, and with me, in my office — until a few months ago. I don’t know why, but toward the end of her life, she stopped coming to my office (which has a separate entrance outdoors). 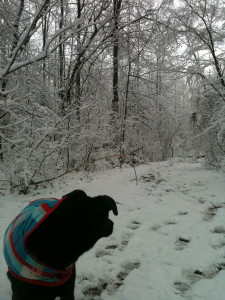 She had amazing bladder control. When we took day trips to visit Emma at college in Asheville, we made frequent stops for her to pee and no matter how much we coaxed, she would never go. Jackie was a bit of a private lady, and a creature of habit. She held it until she got home to visit her familiar bathroom spots in the ivy bed.

When we got chickens, she behaved herself, although sometimes she would chase them briefly, for a moment of fun and exercise. Sometimes, when they free-ranged, she would be naughty and enter the hen pen and eat their food — but she was all-in-all gentle and friendly with any and all living creatures.

She enjoyed walks, especially in the Catawba Nature Preserve, where she often went for a swim or momentarily sprinted after a vanishing deer.

Up until her arthritic end, she devoted her entire being to pleasing Alicia and me. She could still take a two mile walk, and, although it took maximum effort and sometimes a little help, jump up onto the bed.

But I knew the time was coming. I had given considerable thought to the location of her final resting place and had chosen a spot in the yard for that. 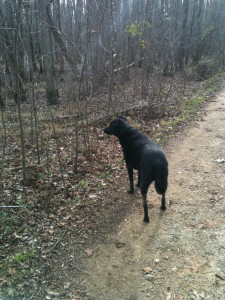 Alas, I didn’t expect it to happen the way it did. Somehow we talk about the future like we know it, and of course we never do and never could. It happened on a cold day of frozen ground, with earth too solid for me and my shovel and Jackie’s entry.

Her death came on Super Bowl Sunday. Very early, when it was still dark out, she wanted to go out. That was unusual. Once out, she did not want to come back in. Also unusual. We got her in and soothed her with our words as she lay on the couch, thinking she had eaten something bad. The last time that happened, the vet said not to give her any food for a day, and she got better.

I was hoping that was it — that she would throw up again and start to feel better. But I feared it was the end and said to her what I needed to say. I told her I loved her and thanked her for being such a great dog.

She didn’t get better. She started to cry. We called our vet, and then the emergency vet — who said to bring her in.

We loved her deeply, and she knew that.

Mostly she loved us. No one teaches the art of love and loss like a pet dog.

On Sunday, we situated a blanket underneath her and carried her to the car, and, at the moment we gently laid her into the backseat, the one who never left, left. 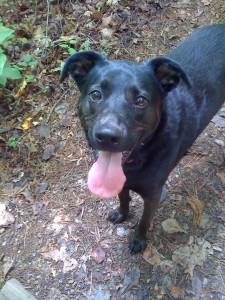 It’s wonderful having Sarah home. Here’s a picture of her (taken without her permission or knowledge), asleep on our couch this morning with Jackie Mudpie.Â  They are very close.

If it weren’t for Sarah, we would not have Jackie.Â  We rescued this dog from a woman who had dozens, perhaps hundreds, of dogs.

We went there that day, looking for a puppy.Â  We had just lost Honey, our previous canine family member.

My father drove us there, with my two daughters.Â  We were disgusted by all of these dogs, the way they were being treated, and the crazy lady who begged us to “send help!”

The kids wanted to leave, and we decided to look elsewhere for a puppy.Â  We were leaving, when suddenly an armful of sweetness appeared in Sarah’s arms.

“Jackie Mudpie!” they said, together.

Thus, for the past five years we’ve had a great dog that answers to the name of Jackie Mudpie.

The dogwood blossoms are gone.Â  The azaleas are browning.

Sometimes I fear the rogue rhododendron could eventually crowd out the azaleas. I’m very meticulous about the way I ignore care for these beautiful plants. Haven’t pruned, fertilized, or anything else in 24 years. Since I don’t know how to do it properly, I’m afraid an attempt would do more harm than good.

The blossoms, however, are more than adequate.

The last photo shows Jackie Mudpie, as she reclines on “the lawn,” enjoying the sun.