As I was bringing in the first log, I saw the first snowflake.Â  It was huge.Â  Then another.Â  And another.Â  A few minutes later, the flakes were smaller but there were a lot more of them.

Because I picked big logs, it took a few hours for the fire to really get going.Â  But it’s a long lasting fire and it’s giving off great heat now.

It was a tough decision, earlier today, while it snowed.Â  Did I want to sit in my office, where the windows gave me a beautiful view of the snowfall — or sit in my living room with the laptop, in front of the fire (with less view).

I did a little of both.Â  Then I went downtown.

Upon my return, my dog was sleeping on the couch, in front of the fire. 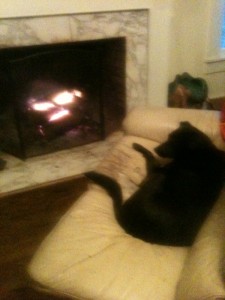 I made her move a couple of feet, so I could have the choice spot.

And now here I sit, with warm feet.Â  The fire to my right.Â  The dog to my left.

And I need to get up and go get some exercise — and don’t feel much like doing it.