I almost ran out of gas today.

I was driving from Salisbury to Mooresville and planned to stop on the way out of town.Â  Then I got a phone call and, while driving and talking, forgot I needed gas. 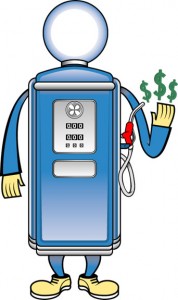 Then it started raining so hard that my engine sputtered to the point of almost stalling out.Â  I was moving well under the speed limit and crawling up the hills.

I forgot all about the gas.Â  I was worried about the car actually getting me home.

I made my three stops in Mooresville and stopped to check under the hood.Â  It was pretty wet, and one of the plug wires was loose.Â  After securing that, the car was much better and I started heading home.

As I was leaving town, I remembered I needed gas.Â  The gauge was on empty.

The first station I came to was a BP.

Years ago, a mechanic advised me to use BP gas.Â  He said it was the best, and much better than the place I normally went (a station that was a little cheaper but is now no longer open).Â  My mechanic said he suspected there was a little water in their gas.

Jews are not supposed to eat shellfish, but many of us love it anyway.Â  I have a regular habit of buying gulf shrimp or oysters, about once a week — and I hate to see them go.

So I passed he BP and drove another block.

What was the next station I came to?Â  Another BP.

So I turned around and drove an extra mile to an Exxon station.

They’re oil spills are so much smaller.Â  And Alaska is a lot further away.