Yesterday, I searched through some of my Mom’s papers. In almost all of her file cabinets, she has a folder bearing my name.

I found some interesting things.

Tennis rankings from 1972. I was ranked 27 in NC. Not bad. Several of those guys ahead of me ended up on ACC teams and on the pro tour. In my mind, I rarely wonÂ  matches in those days. As I read through the list of players, I could remember them distinctly: their serves, their forehands, their backhands, their footwork and style of play, and their personalities off the court. Back then, that was my life. 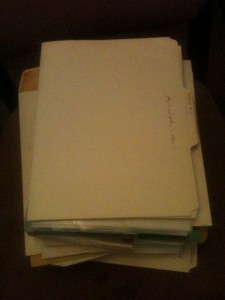 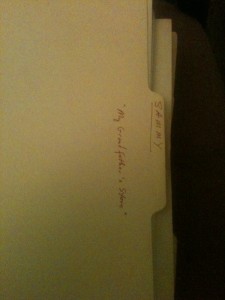 I found lots of short stories and papers I wrote in college. It was fun reading the notes and grades from my professors, thinking about them, who they were for me, and how they took their time to be incredibly generous with their feedback.

Also in those files were notebooks of poetry, letters from girls, letters from friends, letters from Mom, a picture from junior senior prom, term papers, college literary magazines with my stuff in it, lots of school newspaper articles I wrote, my selective service notice, college acceptance letters, etcâ€¦

Mom saved evidence of victories, and I’m grateful for it.

One thing that really struck me was a letter Mom wrote me — probably in college — that somehow wound up back in my file in her files.

This was in the days before email and before word processing. She typed it on a sheet of “Notes from a Jewish Mother” stationary.

In the letter, Mom says that she is working on a story about an SBI agent and that the agent may be fired as a result of her story. She wonders whether it will be published and obviously has concerns about what the agent did and the impact her reporting will have on his life. She stops there and says that she’ll tell me more about it next time we talk.

Then she says that this is a letter about nothing, just to say that she’s up late, working, and wanted to write me, so that I’ll have something in my mail, and to let me know that she loves me.

Then she makes a quip about my not writing her, and warns me that if I write letters to my friends with as little frequency as I write her, then I’ll be a lonely person with little mail to read.

The message there is that what one says is less important than the act of being in communication with those we love. That relationships matter.