He walks down the road thinking this foot hits that crack just below the toe but this foot hits that ice just above the heel and then he does it all over again, wondering if the cold against his face will get worse around the next bend because it’s just plain cold outside or if it will be warmer with more and faster stepping. 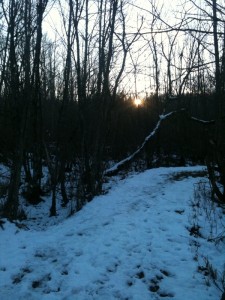 She walks down the path thinking the coffee in her right hand is doing the trick but her left hand in the pocket is colder but not too cold and really a little warmer than the outside of the hand that holds the hot coffee.

He wonders if his father could lend him just a hundred dollars but then how to pay him back. Maybe out of the next paycheck but that needs to pay rent water electric and the muffler is sounding bad but who needs a muffler if you don’t have the money for gas and what kind of mood will his father be in and what would be the best way to ask.Â  The right foot is far from meeting the next stick in the middle so he shortens his stride and almost makes a little hop.

She could light a cigarette but one hand will have to be cold then and the dorm is still three blocks away more than it takes to smoke a cigarette and really too far to walk with one hand really that cold considering her neck is also freezing.Â  She could enter the room quietly and let her roommate sleep but her roommate needs to wake up for her own good.Â  She has work to do and sleeping is just avoidance.Â  She would be doing her a favor to make a little noise even though it wouldn’t help the relationship at all because it’s a known and proven fact that she’ll get mad and say something mean even though she loves her roommate.

He sees her coming in his direction and looks up and down at the bumps of snow and back up and then down again.Â  Up and down and up and down.Â  The air in his chest cools because she’s the girl from that class who likes to answer questions.

She knows that he wants to be an actor but he’s really a singer and not much of an actor if only he knew it and now the cold wind moves from her neck to her cheeks.Â  He’s the boy from that class.

When they pass she almost smiles and he almost keeps his head down and then he grunts and says hi and she does smile and says hi.

“Going to get coffee.”

Her hands warm now and his steps weaving.Â  His dad could be okay and her roommate could need more catch-up sleep.