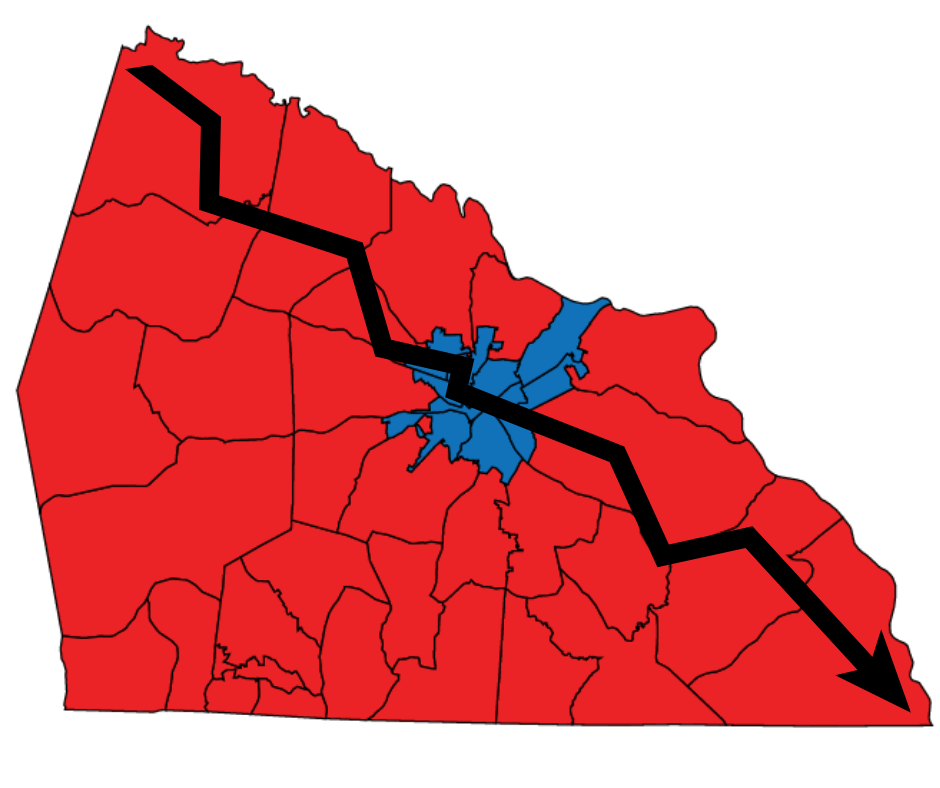 North Carolina does not rank well in the area of vaccinations, and with the exception of Georgia, we’re a much bigger and more densely populated state than the other low performers.

And it’s no comfort seeing the Rowan County numbers. We don’t do well compared to most other counties in the state. And this county is more populated than most of the other low-vaccine counties. We rank 21st in population.

With the Delta variant spreading very fast, these factors, and others, give us a vulnerability rating of “very high,” which prompts a concern that there will be a lot of illness and death this fall and winter, when we’re spending more time indoors.

I’ve lived here most of my life. I was born here and lived in one house for my first 18 years, and then in the house I live in now (3 blocks away) for 35 years. So I’ve lived in the same neighborhood for about 53 of my 64 years.

I’ve worked as a teacher here. I’ve owned businesses here. I have family and friends here. It’s home, and I’m not planning on going anywhere else.

But I find our county’s 30% vaccination rate to be appalling, especially since it’s universally available and free — while other countries remain vulnerable to great suffering and can’t get vaccines at all.

For obvious reasons, our vaccine numbers mirror our educations numbers, and I’m not proud of what we’ve become in the area of education.

The county commissioners and state representatives used to be a mixture of Democrats and Republicans, and much less partisan.

But for the past 30 years, it’s been nearly complete Republican government — and many of these folks seem to have values that don’t align with competent leadership.

When they speak about school funding, they never miss an opportunity to say that ‘money doesn’t solve problems.’ Or they say things like ‘you can’t throw money at a problem.’ From what I’ve read in the newspaper and seen online, they never seem to empathize with the needs of a kid who deserves a quality school in order to live a quality life.

They hold themselves up as moral leaders by spending hundreds of thousands of dollars on a losing court case, fighting for the right to say “in Jesus’ name we pray” at the end of a prayer, before a meeting.

Just a plain ol’ “Amen,” or a nod to God, or nothing, or a moment of silent prayer — something that would have shown common respect to Jews, Muslims, Hindus, atheists, and all other religions who have equal standing under the constitution, was not suitable for this group. If they couldn’t pray in the name of Jesus at a public meeting, then they were excited to go to court and spend all their time and hundreds of thousands of dollars in order to try.

And yet, in the area of morality, Craig Pierce, one of the most pious of the lot, just got a DUI, blowing a .26 and, according to the police report, threatened a police officer in the process.

This hard right politician got drunk enough to reach across the aisle and drive in the left lane.

Another commissioner, one of the ones who spearheaded the costly lawsuit over prayer, a few years ago, showed up drunk, in the morning, to teach his eighth grade class. He was a decent guy who did get help, and he’s since passed away. But he also continued to serve after this happened.

I don’t respect the shaming of a person with a drinking problem and do not intend to do so. But I do question the ability of some people to lead. If a person exhibits enough lack of control to drive in the wrong lane or teach teenagers while under the influence — then maybe he should not make decisions about taxation, health care services, school funding, and other matters of public importance. Sure, he was elected. But…well…it’s obvious that he’s not capable.

Where do we rank?

Our vaccination numbers mirror what’s happened to our public schools in Rowan County over the past 30 years. We have failed, badly.

Where does Rowan County rank? Where does North Carolina rank? I don’t know. There’s plenty of data out there, great for drilling down and looking at a specific school’s numbers, but my Google skills are not sufficient to find school rankings. Perhaps that’s a thing of the past.

There are, however, a plethora of data available on various directory platforms with a certain social media flare. (ie. schooldigger.com, niche.com, or greatschools.org) This gives the ranking that really matters because actual people rank and comment and set the narrative. Whatever the actual ranking, according to the state’s testing and demographic data, yearly progress, and whatever other factors they use, a county’s social media reputation will have a much greater effect on what kinds of business and industry and housing and education and culture show up in that county.

Rowan County has a lower average income than each of its four surrounding counties. The poverty rate in Rowan County increased by 13% from 2010 to 2020.

And while Republicans have managed all of it, holding every political office for decades, they don’t seem to assume responsibility for the decades of economic decline. And the voters will not hold them accountable because they are told that taxes and government spending are evil, and they’re too distracted by this false morality and other irrelevant gossip to vote on the issues. Education is the issue. Competitive schools cost money. Our Republican commissioners have chosen not to compete.

When you get behind early, it makes it harder to catch up.

And we’re used to it. It’s what we know. If you’ve never seen a really nice, well-run, adequately funded school system, then it doesn’t exist as a possibility.

Years of proudly underfunding the school system has hurt our economy. We have two hospitals, three colleges, and Food Lion home office. That’s a lot of brainpower working in a small town in this county. These people who work in Salisbury used to live in Rowan County, and their children went to school here. Now, this class of people mostly commutes from surrounding counties with better schools.

It’s still a good place to live. Because population growth has been lagging behind our neighboring counties, some of which have real traffic problems, the roads here have kept up with the growth and it’s easy to get around.

Rowan was a Democratic county until the 1966 election, when it began it’s swing to the right. That year, Republican John Stirewalt defeated Sheriff Shuping, a Democrat, in an upset. Two years later, Earl Ruth, a popular dean, professor, and basketball coach at Catawba College, and member of the Salisbury City Council, changed his party affiliation from Democrat to Republican, got a big endorsement from Nixon, and won a seat to Congress.

The pump got primed in the 80’s, when we had some extreme right wing Reagan style “government is the problem” guys on the county commission. These self-made, non-college types sent their own kids to private, Protestant church schools and voted no to anything that had to do with public school funding. One of them told me, one time, that school funding was entirely the state’s responsibility and the county had no responsibility at all.

While these Reagan extremist commissioners were considered heroes by some, getting cheers each time they used the word ‘waste,’ many people thought of them as crackpots. While the 80’s foreshadowed what would happen in Rowan County and North Carolina, there were still smatterings of reasonable Democrats and Republicans in the mix — both in the county and in the city.

We began the full right turn on July 4th, 1991, when a very popular President Bush came here in order to play softball in Faith. The national news focused on the fact that there were no black residents of Faith. Locally, it was a huge rally for the Republican Party, and it also brought a lot of young people into that party. I remember kids in bands being pretty excited about playing for the president.

In 2003, Elizabeth Dole, a Republican from Salisbury, who had already served as a Cabinet Secretary in the Reagan and Bush administrations, became a U.S. Senator. She was and still is the wife of Bob Dole, who was the Republican Leader of the United States Senate.

So Rowan County became not just a red county, but an early adopter, well-entrenched red county.

By now, demographics ensure we would be a Republican county anyway. Trump got 68% of the vote in Rowan County in 2020. The parties now have a stark urban/rural divide over the entire country, and Rowan County residents like country living. Biden had a good showing in Salisbury and won 10 precincts. But Salisbury has not grown as fast as the county and now contains 24% of the county’s population. Trump won the precincts outside of Salisbury and Spencer and East Spencer by 40 to 50 points — so there’s almost no hope for a Democrat to win an election here for anything other than the municipal non-partisan races.

A case, yes. But is it a hopeless case?

My point is that we had a few years head start on the era of austerity, and we’re paying a heavy price for it.

It shows up in many ways — income, educational opportunity, employment opportunity, technology, safety, and quality of life.

It may also show up in hospitals this winter, with more COVID.

You can’t start working to solve a problem until you recognize the problem. In the case of Rowan County Republicans versus Rowan County Education…well… there is no real case. But it seems like there has been.

There should be a different kind of case in the other direction: Rowan County Education, and lost hopes for prosperity, versus The Rowan County Republican Party.

You would think a strong Democrat could make that case and be a viable candidate for at least one seat on the County Commission. But, at this point, with county-wide voting for each of the five seats, with party loyalty being what it’s become, even one seat to a Democrat would be a huge upset. Even with a great candidate, a well funded campaign, a strong grass roots following, and a massive, localized get out the vote operation — it would likely end in an embarrassing trounce.