Some of the characters include a mechanic, a drunk theatre manager, a possum, a would-be singer, and a stoner. 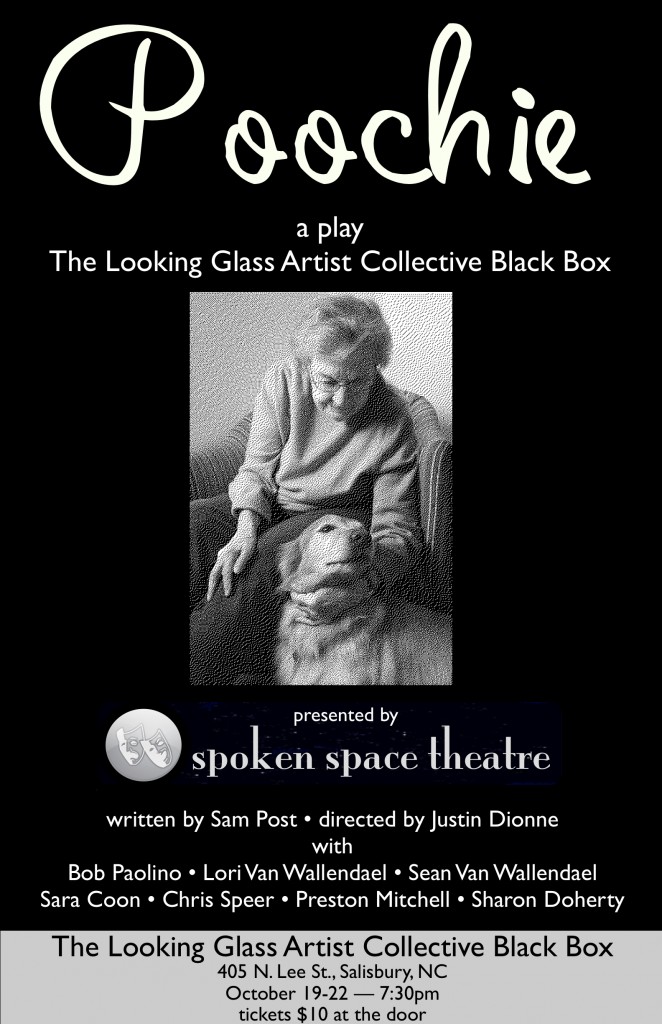 Forgive me, I have sinned. I give my plays away, free, online.

And itâ€™s always a pleasure when somebody wants to use one of them in small space or classroom.

I get plenty of requests for scripts from overseas, sometimes for film projects.Â  What happens after they get the script is anybodyâ€™s guess.

The pleasure comes from the request itself, and that’s almost always the last I hear of it. Occasionally I get a thank-you email, sometimes with a photo.

But while there’s satisfaction, there’s also a certain emptiness that comes with the online giveaways to faraway places. I’ve had the urge to see my own work done and thereby grow as an artist from the experience. My first two plays, Coffee Therapy, and another that I don’t care to think about, much less name, were produced first as dinner theatre, here in my lifelong hometown of Salisbury, NC.Â  Both were done in the upstairs of a local restaurant. I’ve had lots of fun seeing my work produced in Charlotte, and even traveled to New York a couple of times.

But I’ve never had a play produced here, in my hometown, in a theatre. And we have a number of theatres spaces and companies here.

So I recently wrote a play, set a date for production, and put down a deposit at our new, cozy little theatre space downtown, a converted warehouse now known asÂ  Looking Glass Artist Collective.

Since declaring this, things have started to happen.

We’ve had a few readings, with great feedback. And I’ve done a good bit of rewriting based on that feedback.

I started a theatre company, Spoken Space Theatre, and I plan to use this entity to give birth to more of my plays in the future.

Justin Dionne, an energetic, talented young director, has generously agreed to take on the project. He gave the script a careful reading, with more feedback, and suggested more rewrites.

Auditions are two weeks away, and I’m working on the script.

So this is exciting.

Producing my own play, here, offers the opportunity for me to see it, and work on it.

And I’m responsible for paying for it.

The deposit for the theatre space was a chunk, and about as much as I can handle.Â  And I’m assuming we will sell tickets that will bring in some funds.

But there’s still a gap.

So I’m looking for a corporate sponsor or two to put in a thousnd dollars.

There are rewards involved. Anybody who pledges $10 gets a ticket, which is the cost of a ticket. So while it is asking for money, it’s really no different that asking people to buy a ticket in advance.

Kickstarter makes it a game, such that the project gets funded when the goal is met, or not funded at all.

So there’s a bit of drama involved in paying for the drama.

So far, it’s been interesting.Â  Some of my oldest, dearest friends and family members have chipped in. Many of them live in other states and will not travel to see the show.

And I’m a third of the way there.

The play is called Poochie, and it’s about a family dealing with Alzheimer’s Disease.Â  People who know me think I’ve written a play about my family and my mother.Â  I didn’t.Â  I’ve had some experience with this disease (mother and grandmother), but I want to honor them. So instead of writing about my own family, I made one up. Which is the way it should be.

Want to be a producer? This is your chance. Go to Kickstarter.com.