I took a walk around the Catawba campus this afternoon, shortly after the end of the homecoming game (Catawba 31, Brevard 21, I think). 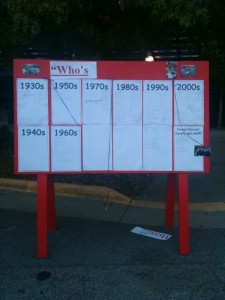 “Divided by Four,” a local band with giant speakers, poured it’s music onto the campus green.

And scattered along the parking lots were brochures advertising Jon Barber for County Commissioner. 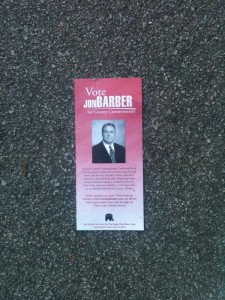 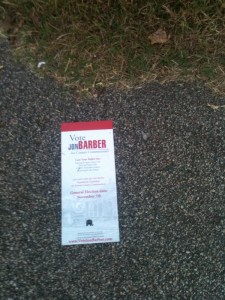 Is this effective campaigning?

Now — it’s possible that the candidate himself attended the game, shook hands, and gave out his brochures.Â  If that’s the case, then I retract the following critique.

But let’s suppose that somebody put these brochures on windshields.

One must consider the context of such marketing.Â  It’s not a positive presentation.

First of all — many of the people who attend homecoming are alumni from out of town.Â  They won’t vote in the local election.

Secondly — those who find paper on their windshield won’t be that happy about it, especially if they’re already in the car when they notice it and then have to get out and remove the paper from the windshield.

Thirdly — when it’s on the ground, it becomes litter, which is not what a candidate wants to be.

Is it possible that these efforts lost Mr. Barber more votes than they won?