The Republican strategy is simple.Â  Generate as much fear and cynicism as possible and suppress voter turnout this fall.

There’s nothing new about that.

According to Republican politicians, we’re supposed to fear many things:Â  including every minority group (and there are a lot of those).

Of course we should also fear the budget deficit.

There’s nothing new about that either.

They’ve been singing this song since the 70’s — despite the fact that Republicans contribute to deficit spending as much as Democrats.

It’s hard to fear abstract things like federal budget deficits.Â  So we hear things like passing on debt to our children, or even losing our freedom, and our cherished constitution (I don’t really see the connection, but I’ve heard a lot of people try to make it).

To quote Arnold Schwarzenegger, all this talk from ‘economic girly men’ is working (along with the real facts about economic hard times).

I try to be an optimist — so I recommend young families to do what Republicans would probably warn against:Â  have babies! 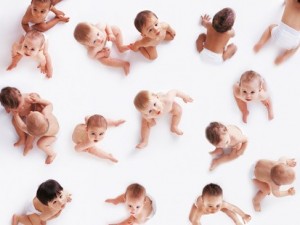 There’s a good chance they will, as adults, become members of a birth trough generation, and benefit from being one of the lucky few.

Sure, they may struggle, and the children may not live luxurious childhoods, but think of the opportunity.

He talks about people who were born in the depths of The Great Depression.Â  They had rough childhoods and many spent time overseas, fighting a World War.Â  But the ones who survived prospered in the long run.Â  They had smaller class sizes, got lots of attention, and had less competition for good jobs.

That may be the case now.