Sitting here on my couch.

The dog — Jackie Mudpie — sprawled beside me, sleeping.

She’s not feeling well. Her stomach is growling. She didn’t eat much yesterday. Today is a holiday. We’ll go to the vet tomorrow.

There’s been some loud hammering on our house this morning. Our kitchen had a leak, and we just had it fixed. Rain is on the way, and all is well. 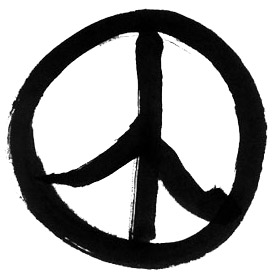 The dog is not well, but she’s resting. She’s at peace.

And we talk about remembering those who sacrificed.

They sacrificed because there is a thing called war that we, as human beings, think is normal.

I never scarified. Other than books and movies and watching news, I have no idea what war is like. My whole life has been this way — lived in a war-free zone.

It’s Memorial Day. It’s peaceful. And while thanking and honoring those who served and scarified is proper and appropriate, it’s not sufficient.

We can honor them more by creating peace in the future.

How do we do that? How do we eliminate war? How do we change the way we talk about war?

On days like today, we’re drawn to words like glory and honor and sacrifice and country. And that’s good. We owe them that.

But what about including words like insanity and fear and loss and pain and grief and dying young.

How do we make a world in which Memorial Day is something that refers to a relic of the distant past?

Last night, at 2am, I was up working.Â  This is not unusual.

What is unusual is that my phone should ring at this hour.Â  It was a local number.Â  It’s my business number also, and I usually answer as such — if I don’t recognize the caller.Â  But not at this hour.

I’ve gotten other calls in the wee hours.Â  It’s usually either somebody who is crazy and can’t find the little man we hide each week, or somebody who is expecting to leave a message on the answering machine.

But this is also my personal phone, and I always think it could be bad news.Â  My policy is basically this:Â  if I’m awake, I answer it.Â  If I’m asleep, I don’t.

The guy asked me how much we charge for our ads in Coffee News.

I told him.Â  We discussed the terms and he said he wanted to buy the ad.Â  He told me he wanted only his name — his nickname — in the ad.

“Everybody knows me,” he said.

He also had a tagline in mind.Â  It was a bit egocentric, and had nothing to do with what he did.

I suggested that he include not only his nickname and tagline — but also the service he offers.

After being on the phone for some time, I still didn’t know this myself and was curious, to say the least.

“What service do you offer?” I asked.

He kept responding that everybody knew him.Â  He said all the cops knew him.

I said we wanted only good, legal businesses in Coffee News.

We went back and forth about this.Â  I guess my imagination got the best of me, because I asked if he was a private eye.

I wrote up the order.Â  When we sell ads, we ask for people’s name, address, etc. — and we ask for a birthday — so we can send a card.

He was elderly.Â  He served in Korea and spent time there in jail.Â  He described for me the circumstances of his arrest, how he had been shot and was lucky not to have been killed.

We talked for quite a while.Â  He was in New York on 9/11, a block away from the twin towers.Â  He saw one of the planes hit.Â  His cell phone kept working when others did not. He impulsively decided that he wanted a picture of the twin towers in the ad. He said he could give me a good picture, if I didn’t have one.

He had high praise for my name.Â  “Every Sam I’ve known has been a good egg,” he said.Â  This includes a former boss named Sam who died 15 years ago.

He wanted to bring the payment to me.Â  I suggested I make him a proof for the ad and visit him — today, at 2 o’clock.Â  He could pay then.Â  He seemed to be pleased with this arrangement.

He asked what I was doing up at this hour.Â  I said I was trying to fix my computer.Â  He asked if I had a computer I could sell him, and I said I did not.

At 3am, he called again.Â  He asked if I had finished making his ad.

He asked if I could help him by locating the number for a taxi.

“Where are you going?” I asked.

“Catching a train,” he said.

“If you’re getting on a train, then how are we going to meet at two o’clock?”

He asked what I was doing up at this time of the morning.Â  “Going to bed,” I said.Â  He supported that.

Today, I did not design the ad.Â  I called and talked with his daughter.

He has Alzheimer’s.Â  He was out, wandering.Â  She didn’t know where he was or what to do.Â  We talked for quite a while.Â  We talked about a variety of options (including the V.A.), but my primary suggestion was that she call Alzheimer’s Association hotline and talk to somebody there.

It’s a great organization.Â  Over the past four years, I’ve called several times for support and information — in regards to my Mom’s care.

He was a nice guy.Â  We connected.Â  Two night owl busy bodies who like to talk.Â  I hope they find a way to take good care of him.