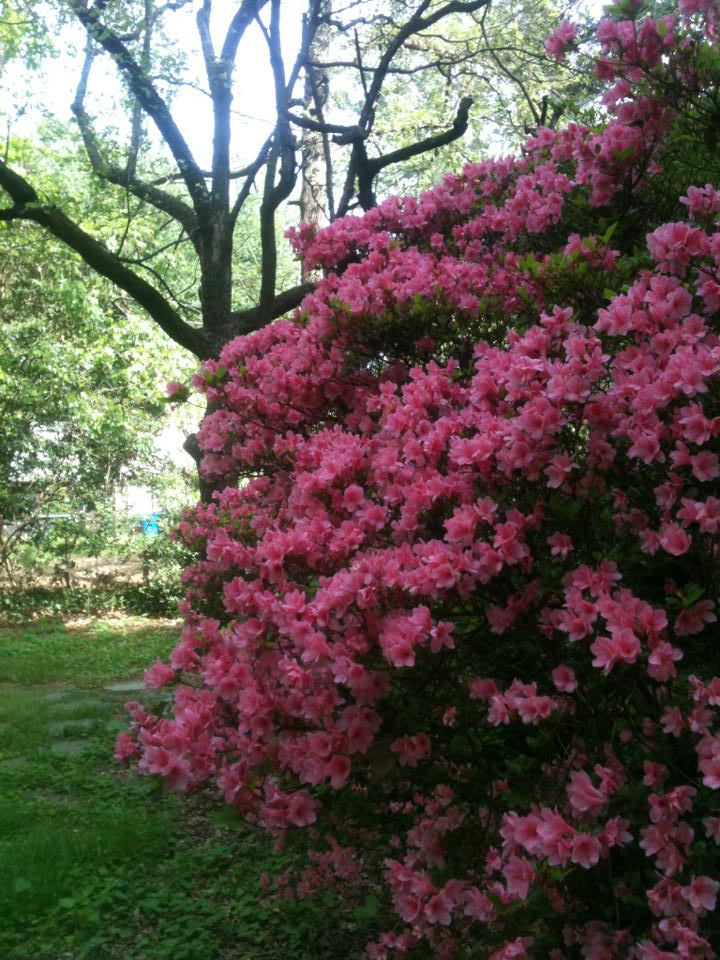 I wrote this little play for the Lee Street 10 minute play festival. The guidelines requested a comedy with the theme Yard Sale. Alas, the period of suspense has ended and this script was not picked. Which gives me the opportunity to share it here 🙂

The picture here is my front yard — and what it will look like, briefly, in a couple of weeks.

WOMAN:Â (on phone) I saw your listing on Craigslist. I’m calling about the yard sale.

MAN:Â Yes Ma’am. What do you need to know?

WOMAN:Â Well, how long have you had it?

WOMAN:Â How big is it?

MAN:Â She’s two thirds of an acre, and of course there’s the house.

WOMAN:Â Iâ€™m not looking for a house.

MAN:Â No ma’am. We live in the house. Just selling the yard.

WOMAN:Â How big is the yard?

MAN:Â It’s right around half an acre.

WOMAN:Â Does it include any trees?

MAN:Â We’ve got some trees.

MAN:Â Let’s see, it’s got some old shrubs. Of course, a shrub is not a tree. Itâ€™s got three beautiful dogwoods. Five or six pines, and there’s a maple tree.

WOMAN:Â I’m just trying to visualize how much shade it has. I’d like to have a garden.

MAN:Â You could have a garden. I don’t know if it would suit you. You’re more than welcome to take a look and see for yourself.

WOMAN:Â I might do that. When could I come over?

SCENE 2
(They walk around the yard.)

MAN:Â We used to have a garden. Right there.

WOMAN:Â That’s all shade. What did you grow?

MAN:Â Mostly tomatoes. We used to love tomatoes. Tomatoes and cucumbers. One time I tried beans but that got out of control.

WOMAN:Â Did they get enough light?

MAN:Â It was before I planted that maple tree. Dumbest thing I ever did. But if you cut it down, you could have a nice vegetable garden right there. Thatâ€™s good dirt. I promise you that.

WOMAN:Â You wouldnâ€™t mind if I killed a tree you planted?

MAN:Â Lady — Iâ€™m selling the yard. Whoever buys it can do anything they want.

MAN:Â Is that why you’re looking to buy a yard?

WOMAN:Â That and some other things. I just like the space of my own yard. I like sunbathing. I also like to sit outside and read. So some trees are good. I could get a hammock. But mostly, it’s for my dog. I’ve got an apartment and we’re happy there — but she needs more room to play.

MAN:Â What kind of dog?

WOMAN:Â Not so big. She’s friendly. Do you like dogs?

WOMAN:Â She loves people. You don’t have to worry about her.

WOMAN:Â So I could put in a fence, for the dog?

MAN:Â You can build a ladder to the sky if you want. I’m selling the yard in its entirety.

WOMAN:Â Why are you selling?

MAN:Â We’re retired and we have some medical expenses. The house is perfect, but keeping up with the weeds and the grass is more than I can handle. One thing about a yard — it never stops growing. In fact, I’ll tell you a little secret. Iâ€™m not trying to discourage you — but just to be straight. You don’t have a yard. A yard has you.

WOMAN:Â My dog would love this.

MAN:Â Thatâ€™s â€˜cause of her color.

WOMAN:Â Yep. With a little dark brown on her paws and white patch under her chin.

MAN:Â I had a little beige dog. Named Stranger. Best little dog you ever saw. Buried her right there.
(He points at where she’s standing. She steps back a little.)

MAN:Â Sometime back in the 70’s or 80’s. I also buried a few cats over there. And some other dogs. Fru Fru, Kellie, Ding Bat. My daughter’s mouse. That cockatiel. Come to think of it, your standing on quite a little graveyard right there.

WOMAN:Â I was kind of thinking about putting the hammock there.

MAN:Â It is a good place.

WOMAN:Â Not if it’s a graveyard.

WOMAN:Â I wish you hadnâ€™t told me that.

MAN:Â You know what that is?

WOMAN:Â That piece of wood?

WOMAN:Â Did you build that?

WOMAN:Â How many children do you have?

MAN:Â Two. They used to take a lot of food up there. What is it about kids and a tree house that makes them want to eat in it?

MAN:Â I guess when thereâ€™s food in there it makes it like a real house.

MAN:Â They got to where theyâ€™d take their dinner up there rather than eat in the kitchen. And theyâ€™d sleep in there too. Now right over there, they had a playhouse. I built that. They never wouldaâ€™ ever thought to eat or sleep in the playhouse. And believe me, it was a lot nicer than the tree house. We had this swing set over there. Two swings, a slide, monkey bars. I guess you could say that’s why I don’t need this yard anymore.

MAN:Â Grew up and now theyâ€™ve got their own yards.

WOMAN:Â Itâ€™s a nice yard. Iâ€™m gonna go home and think about it.

MAN:Â Do that. It’s a big decision to buy a yard. It’s not going anywhere.

WOMAN:Â Somebody else could buy it.

MAN:Â They could. But most people are looking for a house with a yard — not just a yard by itself. You don’t want to rush. By the way, that strip right there is not for sale. We’ll need a way to come and go.

WOMAN:Â If I buy it, I won’t mind you walking through my yard.

MAN:Â Oh no. I wouldn’t want to impose. We just wonâ€™t be selling that little strip there.

WOMAN:Â Is there anything else I should know? Anything underground you haven’t told me about?

MAN:Â There’s a water line, of course. And gas and electric. You can’t move those.

WOMAN:Â Of course. Anything else?

MAN:Â Okay. Bring Ginger back if you want. Let her have a sniff.

MAN:Â Oh — there is one more thing.

MAN:Â That little patch we wanna keep — to get in and out of the house.

MAN:Â My wife and I — we want to be buried there. That kills two birds with one stone. Access while weâ€™re alive, and then a final resting place. It wonâ€™t be on your yard, but I thought you should know.

WOMAN:Â You want to be buried there?

MAN:Â Just that one spot. The rest of it will be yours.

WOMAN:Â I donâ€™t want you buried there.

MAN:Â It wonâ€™t be on the part we sell you.

WOMAN:Â I want a yard, not a cemetery.

WOMAN:Â I donâ€™t think so.

MAN:Â Well, you can go home and think about it.

WOMAN:Â Iâ€™ve thought about it. I donâ€™t want it.

MAN:Â Because weâ€™ll be buried there?

MAN:Â Then itâ€™s a good thing I told you.

WOMAN:Â Why canâ€™t you get a plot in the cemetery?

WOMAN:Â Because thatâ€™s where everybody else is!

MAN:Â You think it looks better?

WOMAN:Â Of course! Thatâ€™s weird, being buried over there like that.

WOMAN:Â Okay — I thought this was an actual yard sale.

WOMAN:Â Not when you plan to put yourself in it.

MAN:Â Hopefully that wonâ€™t be for while.

WOMAN:Â That doesnâ€™t mean I need a daily reminder.

WOMAN:Â You being buried next to my yard!

MAN:Â You canâ€™t ignore it.

WOMAN:Â I most certainly can. Forget it.